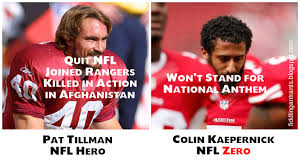 Colin Kaepernick is back in the headlines this week after GQ named him their “Citizen of the Year” for his sideline protests that have sparked a national debate. The former 49ers QB was GQ’s choice for “Citizen of the Year” because, according to their article announcing the decision, they are “Celebrating the man who became a movement.” Apparently, GQ believes that the best way to be a great American is to disrespect the symbols of our country, and impugn the legacy of those who have given their lives for our freedom. Such a decision by GQ rightly has Americans reeling over the magazine’s definition of good citizenship.

It remains somewhat unclear to me why Colin Kaepernick began taking a knee during the National Anthem while in the NFL. His own statements have, at times, seemed contradictory, ranging from a peaceful protest of “police brutality” to protesting the inherent racism that Kaepernick claims is embedded in the National Anthem itself. If Kaepernick wanted to raise awareness of police tactics and the relationship between law enforcement agencies and the communities that they serve, most Americans, myself included, would welcome the conversation. Clearly, there are issues related to some law enforcement officers and their relationship to the communities that they serve, and those issues ought to be addressed. The need for constructive dialogue does not, however, justify disrespecting the symbols of American freedom and those who have fought to protect them.

When I think about NFL players who deserve the title of “Citizen of the Year,” I can’t help but remember American hero Pat Tillman. Tillman was the first professional football player killed in combat since 1970 during the height of the Vietnam War. Following the September 11th, 2001 terrorist attacks, Tillman left the NFL to join the military, where he lost his life during Operation Enduring Freedom in Afghanistan in 2003. When I think about heroes, I think less about Colin Kaepernick and more about Pat Tillman.

The First Amendment to our noble Constitution guarantees free speech to each of our citizens, and I respect that right even if I disagree with what is being spoken. Mr. Kaepernick has the right to do what he did with regard to our Flag and Anthem, but the American people have the same right to reject his statements as disrespectful to people like Pat Tillman who have paid the ultimate price for football games to take place in freedom and safety on Sundays. I am 100% on board with discussing how we can improve the relationship between our law enforcement agencies and the communities that they serve, but that conversation can be fostered without disrespecting the nation we are trying to improve.

As an American patriot who bows before God and stands for the Flag, I do not agree with GQ’s decision to confer the title of “Citizen of the Year” on Colin Kaepernick.