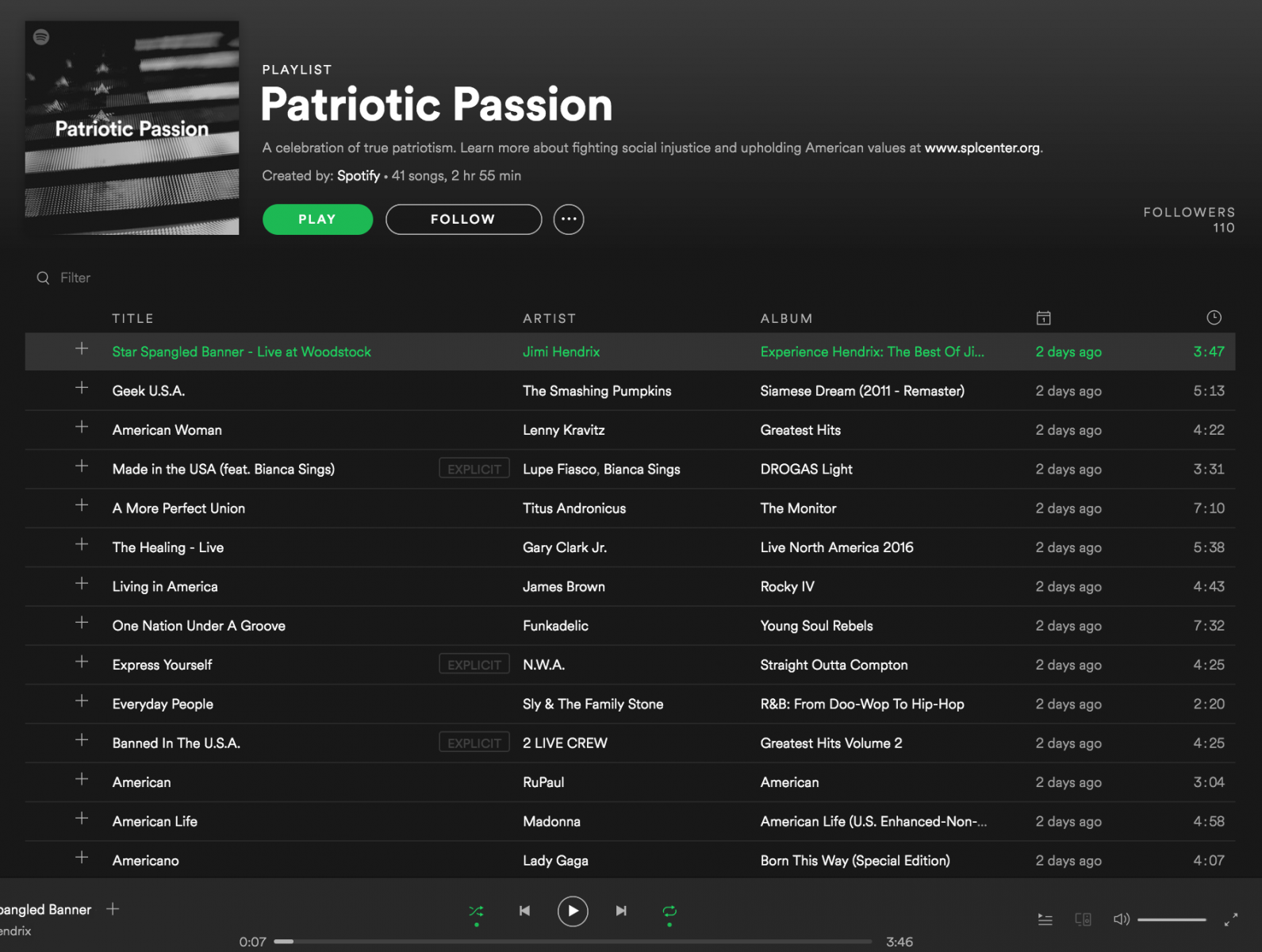 “Illegal content or material that favors hatred or incites violence against race, religion, sexuality, or the like is not tolerated.”

Spotify—the leading on-demand music subscription company with more than 140 million users around the world—has removed some artists identified by the Southern Poverty Law Center (SPLC) as white supremacist “hate bands” from its service in the U.S., according to QZ.com.

Back in 2014, the hugely influential leftist activist organization known as the SPLC published a list of 37 “white power” artists; most of those names seem to have been wiped from Spotify within the last few days.

“Illegal content or material that favors hatred or incites violence against race, religion, sexuality, or the like is not tolerated by us,” a Spotify spokesperson told Billboard.

Spotify followed up on its deletion of “hate bands” by making a playlist called “Patriotic Passion,” which a spokesperson described as “a soundtrack to an America worth fighting for.” That “patriotic” list includes such artists as NWA, Ru Paul, 2 Live Crew, Madonna, and Lady Gaga.

All this comes only a few weeks after Spotify launched an audio and visual project called “I’m With the Banned,” supporting and promoting artists from countries affected by the US’s new partial travel ban. Donald Trump’s name is not mentioned once in Spotify’s press release—but it doesn’t need to be, and Spotify’s political views are made even clearer by the company’s actions this week.

Now that Spotify has laid out criteria for what music is offensive enough to be removed, will it apply the same standards to all songs in the future? Who will judge? Take, for example, Spotify’s “Patriotic Passion” playlist, which features controversial groups like N.W.A and 2 Live Crew that could very well be argued to “favor hatred or incite violence against race, religion, sexuality, or the like.” Or should the newly revived Guns N’ Roses be removed for one 1989 song that talks about “niggers, immigrants, and faggots?”

“By publicly deciding to wade in and remove content, as Facebook and other platforms have recently been pressured to do,” the article concludes, “Spotify is pledging to draw some sort of line on acceptable music—though where that line is exactly remains unclear.”

As long as the left is drawing that line, it will always be drawn to suit the Progressive agenda.