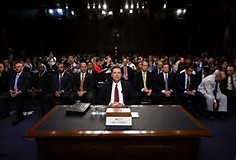 The Times report claimed that, after small talk, Trump turned the conversation to the alleged loyalty demand and Comey replied he was not “reliable” in the conventional political sense but would always be honest with the president.
The newspaper reported:

As they ate, the president and Mr. Comey made small talk about the election and the crowd sizes at Mr. Trump’s rallies. The president then turned the conversation to whether Mr. Comey would pledge his loyalty to him.

Mr. Comey declined to make that pledge. Instead, Mr. Comey has recounted to others, he told Mr. Trump that he would always be honest with him, but that he was not “reliable” in the conventional political sense.

According to the Times‘ timeline, Comey replied that he was not “reliable” politically in response to an alleged loyalty demand from Trump.

In Comey’s statement, however, the former FBI chief writes that he first informed Trump he was not “reliable” politically and that this statement stemmed from Comey’s own internal sense of unease based on his personal interpretation of the setup of the dinner as a one-on-one meal.

Contrary to the Times report, in Comey’s telling, the alleged request for a statement of loyalty came after Comey, unprompted by anything Trump said, told the president he was not politically “reliable.”

The relevant portion of Comey’s statement reads:
My instincts told me that the one-on-one setting, and the pretense that this was our first discussion about my position, meant the dinner was, at least in part, an effort to have me ask for my job and create some sort of patronage relationship. That concerned me greatly, given the FBI’s traditionally independent status in the executive branch.

I replied that I loved my work and intended to stay and serve out my ten-year term as Director. And then, because the set-up made me uneasy, I added that I was not “reliable” in the way politicians use that word, but he could always count on me to tell him the truth. I added that I was not on anybody’s side politically and could not be counted on in the traditional political sense, a stance I said was in his best interest as the President.

A few moments later, the President said, “I need loyalty, I expect loyalty.” I didn’t move, speak or change my facial expression in any way during the awkward silence that followed. We simply looked at each other in silence. The conversation then moved on, but he returned to the subject near the end of our dinner.

Comey’s statement makes clear his remark about not being “reliable” politically stemmed from his own interpretation of the dinner.

He then claimed that later in the dinner, Trump again demanded loyalty:

Near the end of our dinner, the President returned to the subject of my job, saying he was very glad I wanted to stay, adding that he had heard great things about me from Jim Mattis, Jeff Sessions, and many others. He then said, “I need loyalty.” I replied, “You will always get honesty from me.” He paused and then said, “That’s what I want, honest loyalty.” I paused, and then said, “You will get that from me.”