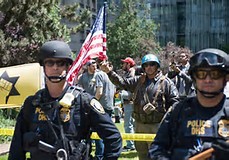 A Trump Free Speech Rally in Portland, Oregon drew hundreds of participants, this past weekend. The rally was challenged by an anti-Trump crowd that had surrounded the park. Their protest was because of stabbing murders that happened a week before, which were incited by racial tensions.

The stabbing death of two passengers were fueled by racial hate, which had started with the killer yelling hate slurs at two teens on a commuter train. The man had stabbed three passengers that had intervened to protect the teens. the teens were both minorities, one was black and the other was wearing a Muslim head scarf.

The man was arrested and charged with both murders and is still in police custody. Trump had commented on the murders and was acknowledged the victims for standing up against hate and intolerance but that didn’t change the minds of the protesters.

The protesters and those attending the rally were chanting at each other for much of the day but violence was kept to a minimum. There were over a dozen arrest and an array of weapons seized, by local law enforcement. The protesters had initiated most of the interactions and was no different than the other anti-Trump protest we have seen over the past 6 months. 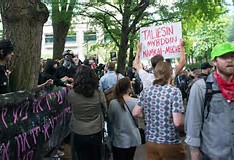 As the rally was coming to an end, police had ordered protesters to leave the area, which was to keep from an incident occurring. The officers had encountered some resistance when asking them to leave and members of the protesters started to throw rocks and other objects at the officers.

After using pepper spray balls, police were able to force the remaining protesters to an ally and forced them into a single file line. The group was forced to provide identification and were photographed before they were free to leave.

Though the rally did not get out of hand, it is worrisome that our country has come to the point of protesting a rally over something that had nothing to do with the rally. The mayor had encouraged federal officials to recall the permit for the Trump rally in fear of violence and retaliation of the recent murders. Obviously, the mayor was not successful but worries of retaliation should not be a concern at a peaceful rally.

Our country is divided more than ever and the tensions do not seem to be going away anytime soon. The issues that have divided our country are farther from being resolved than ever before. We will only see escalated incidents as the left’s anti-Trump push continues and the tensions are encouraged, by liberal leaders.