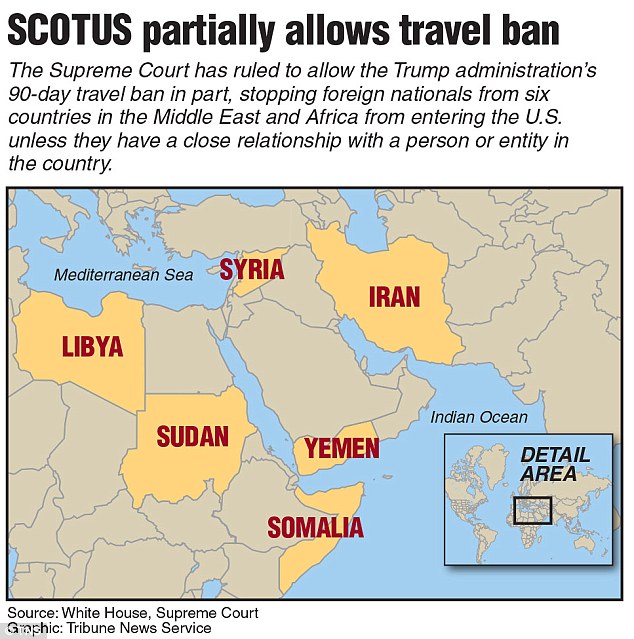 President Donald Trump took a victory lap on Monday after the Supreme Court restored most of his executive order banning incoming travel from six terror-prone countries.

‘Today’s unanimous Supreme Court decision is a clear victory for our national security,’ the president said in a statement shortly after the high court ruled. ‘It allows the travel suspension for the six terror-prone countries and the refugee suspension to become largely effective.’

The Supreme Court said it will decide in the fall whether or not the travel ban is constitutional. Liberal state attorneys general have argued that it amounts to a religious test for entry into the U.S. since the affected countries all have Muslim majorities.

The court said that while the wheels of justice turn, the Trump administration can enforce the executive order against anyone from those nations who doesn’t already have a ‘bona fide relationship’ with a U.S. citizen or legal resident.

The stopgap measure, announced Monday morning, is largely a victory for Trump, who will be allowed – at least temporarily – to stem the flow of immigrants and refugees from Iran, Libya, Somalia, Sudan, Syria and Yemen.

Trump has said he would put his ban into effect 72 hours after the Supreme Court gives him a green light.

Technically, the justices left a lower court injunction in place, but only for people whose cases mirror those of the original plaintiffs – meaning ‘foreign nationals who have a credible claim of a bona fide relationship with a person or entity in the United States.’

‘All other foreign nationals are subject to the provisions of [the executive order],’ the court ruled.

Trump framed the decision as a win for national security, mirroring his claims that controlling travel entries is a vital anti-terror tool.

‘As President, I cannot allow people into our country who want to do us harm,’ he said Monday. ‘I want people who can love the United States and all of its citizens, and who will be hardworking and productive.’

‘My number one responsibility as Commander in Chief is to keep the American people safe. Today’s ruling allows me to use an important tool for protecting our Nation’s homeland.’

Democratic National Committee chairman Tom Perez lashed out at the administration for proposing the ban in the first place, and
‘Donald Trump’s Muslim ban is an unconstitutional and un-American assault on our country’s foundation of religious freedom,’ Perez said in a statement.

‘As a nation, our diversity is our greatest strength, and we cannot allow such prejudice to shut the doors of progress. Democrats will continue to fight this hatred every step of the way.’

‘Today’s unanimous Supreme Court decision is a clear victory for our national security. It allows the travel suspension for the six terror-prone countries and the refugee suspension to become largely effective.

‘As President, I cannot allow people into our country who want to do us harm. I want people who can love the United States and all of its citizens, and who will be hardworking and productive.

‘My number one responsibility as Commander in Chief is to keep the American people safe. Today’s ruling allows me to use an important tool for protecting our Nation’s homeland. I am also particularly gratified that the Supreme Court’s decision was 9-0.’

But Attorney General Jeff Sessions called the ruling ‘an important step towards restoring the separation of powers’ between the White House and the federal courts.

‘We have seen far too often in recent months that the threat to our national security is real and becoming increasingly dangerous,’ he added.

‘Groups like ISIS and al Qaeda seek to sow chaos and destruction in our country, and often operate from war-torn and failed countries while leading their global terror network. It is crucial that we properly vet those seeking to come to America from these locations, and failing to do so puts us all in danger.’

The administration has said the ban was needed to allow an internal review of the screening procedures for visa applicants from the six relevant countries.

That review should be complete before October 2, the first day the justices could hear arguments in their new term.

The Supreme Court could have a vacancy by the time that autumn session rolls around, if Justice Anthony decides to retire as some expect.

Kennedy did not use the occasion of Monday’s scheduled high court announcements to say he would be stepping down.

But if he does, President Donald Trump will have a second pick in the first months of his administration. Kennedy’s departure could also allow conservatives to take firm control of the court.

Kennedy turns 81 next month and has been on the court for nearly 30 years. Several of his former law clerks have said they think he is contemplating stepping down in the next year or so.

Washington was abuzz with talk this weekend that President Donald Trump may soon have another chance to nominate a judge to the highest court in the land.

If the speculation pans out, that would give Trump his second high court pick in the first months of his administration.