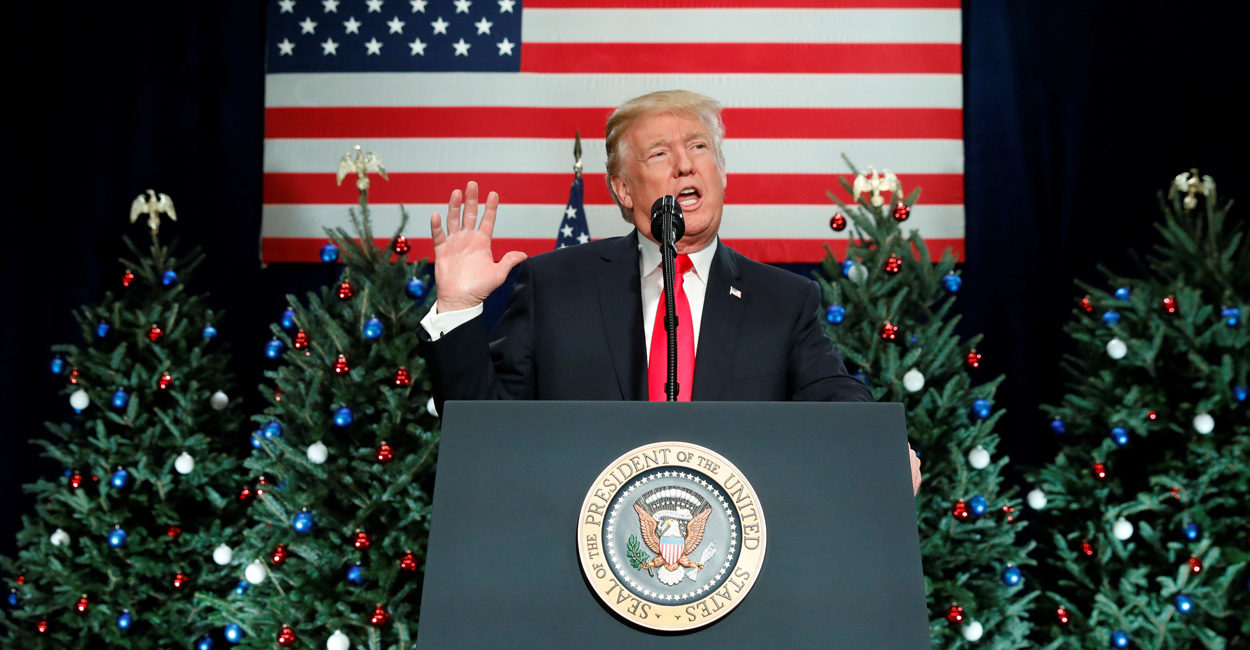 As the Senate prepares to vote on a tax reform package, President Donald Trump called the vote a “moment of truth.”

The president fired up the crowd as the Senate nears a vote on a bill that would lower income tax rates, simplify the tax code, and reduce the highest corporate rate in the industrialized world from 35 percent to 20 percent.

The House passed a similar package, but one that differs in its treatment of the corporate tax rate and the number of brackets. The Senate bill keeps seven brackets, though with lower rates, delays the corporate rate cut by a year, and eliminates the Obamacare individual mandate.

Trump put a holiday spin on the legislation.

Trump talked about how the tax code has made America uncompetitive.

“We cannot sit idly by and see ourselves losing in competition to other countries as they continue to take away their jobs because their tax codes are more competitive and less burdensome than ours. That’s why we must cut our taxes, reduce economic burden, and restore America’s competitive edge.”

Throughout the speech, he hit themes familiar with what he said on the campaign trail.

“If we do this, then America will win again like never, ever before,” Trump said. “A vote to cut taxes is a vote to put America first again.”

During the 2016 presidential campaign, he frequently talked about how Americans would become “tired of winning” under his presidency.

Noting the declining unemployment rate and strong stock market, he joked with Republican Missouri Gov. Eric Greitens, who was on the stage, that this was already about to happen.

Now we are getting number that nobody thought [was] possible, certainly not at this time and the numbers going up are much better than anybody anticipated. In fact, they’re going to say that Trump is the exact opposite of an exaggerator. They are going to start saying that he ought to be a little bit more optimistic because his predictions were low. A year and a half ago they said, ‘He can’t do that.’ Now they’re saying, ‘That was quick.’ …

We are going to win so much that the people of Missouri are going to go to your governor, and say, ‘Governor, please go see the president. We can’t stand winning so much.’ I used to say that. That’s what’s happening. Then the governor is going to come to the beautiful, historical Oval Office, he’s going to say to me, ‘Mr. President, the people of Missouri cannot stand all this winning. They don’t want to win so much. They love the old way where they had lousy job numbers, lousy economic numbers, lousy, they loved it. And I’ll say, ‘Governor, I don’t care what they say in Missouri, we are going to keep winning and winning and winning.’ I used to say that, I had fun with that.

Trump, a billionaire, stressed that the tax reform plan is so targeted at working-class Americans that it won’t help him or his wealthy friends.

“It [the current tax code] is riddled with loopholes that let some special interests, including myself in all fairness,” Trump said. “It [the reform proposal] is going to cost me a fortune, this thing, believe me, believe me, this is not so good for me. I have some very wealthy friends, not so happy with me, but that’s OK. I keep hearing [Democrat Sen. Chuck] Schumer, ‘This is for the wealthy.’ If it is, my friends don’t know about it. I have to explain why. Now it is great for companies because companies are going to bring back jobs and we are lowering the rates very substantially.”

Trump talked about hitting other agenda items as well, such as taking another shot at repealing Obamacare, pushing for an infrastructure plan, building a border wall, and welfare reform.

(First reported by Fred Lucas and published by The Daily Signal) http://dailysignal.com/2017/11/29/trump-frames-tax-vote-as-swamp-drainers-vs-swamp-dwellers/   (November 30, 2017)