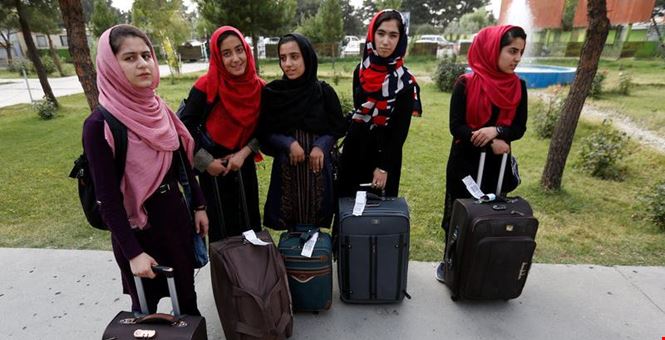 I was as surprised as the next person to see a positive headline about President Trump Thursday, but here it is: “Trump intervenes to grant rejected Afghan girls entry to U.S. for robotics contest.”

Six teenage girls from Afghanistan had been chosen to compete in the first ever FIRST Global Challenge, held in Washington, D.C. The inaugural competition gives teams from around the world the opportunity to show off the robots they’ve created. Yet, the U.S. State Department denied the Afghan girls team visas – twice. As such, the girls were planning to instead participate in the contest via Skype.

Learning of the predicament, President Trump sought out National Security Council officials to act on the contestants’ behalf. Those officials then contacted Homeland Security, which approved the girls entry via the “parole” system that allows visitors to stay in the U.S. for 10 days.

“The State Department worked incredibly well with the Department of Homeland Security to ensure that this case was reviewed and handled appropriately,” Dina Powell, Trump’s deputy national security adviser for strategy, said in a statement. “We could not be prouder of this delegation of young women who are also scientists — they represent the best of the Afghan people and embody the promise that their aspirations can be fulfilled. They are future leaders of Afghanistan and strong ambassadors for their country.”

The all-girls team dominated the science and technology competition in Afghanistan – an impressive feat in a country where 66 percent of girls ages 12 to 15 are out of school, reports Human Rights Watch. The organization provided more stunning statistics.

In a country where only 37 percent of adolescent girls and 19 percent of adult women are literate, donor countries should be sweeping these girls up to see how their achievement can be replicated – not slamming the door in their faces.

American media is praising the president’s actions, as is Afghanistan’s ambassador to the U.S.

Thank you @POTUS
We are proud to have them represent Afghanistan. I look forward to seeing them at the competition.https://t.co/G2GrahIykf

The robotics competition will be held July 16-18 in the nation’s capital.