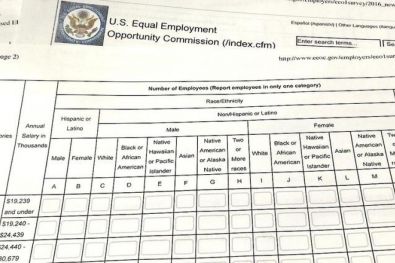 (CNSNews.com) – A year before leaving office, President Barack Obama announced new steps to narrow what was described as a gender pay gap.

Obama directed the Equal Employment Opportunity Commission (EEOC), in partnership with the Department of Labor, to annually collect pay data by gender, race and ethnicity from businesses with 100 or more employees.

On Wednesday, the Trump administration put that Obama-era order on hold.

In a memo to the EEOC, the White House Office of Management and Budget (OMB) said it is launching a review of the effectiveness of the equal pay data collection initiative. (Companies are still required to annually file information on the race/ethnicity and gender of their employees, but the wage information sought by Obama will not be included.)

“Among other things, OMB is concerned that some aspects of the revised collection of information lack practical utility, are unnecessarily burdensome, and
do not adequately address privacy and confidentiality issues,” the OMB said.

Victoria Lipnic, the acting chair of the EEOC, issued a statement saying she remains committed to the strong enforcement of equal-pay laws. She said the OMB directive will not deter EEOC’s enforcement efforts.

“Going forward, We at the EEOC will review the order and our options,” Lipnic said. “I do hope that this decision will prompt a discussion of other more effective solutions to encourage employers to review their compensation practices to ensure equal pay and close the wage gap. I stand ready to work with Congress, federal agencies, and all stakeholders to achieve that goal.”

The American Civil Liberties blasted the OMB directive, accusing the Trump administration of having no interest in “rooting out gender and racial inequality in th workplace.”

The U.S. Chamber of Commerce has argued that the “massive pay data form” — with 3,360 cells on the spreadsheet — would impose huge record-keeping burdens and would not help the EEOC fight pay discrimination.

“By lumping jobs into broad categories, employers would be forced to categorize employees who perform wildly different work into these groupings,” the Chamber said in March 2016. “The job groupings are exceedingly broad, and will necessarily capture a wide range of positions that are not capable of meaningful compensation comparisons.”

For example, the Chamber noted that in a hospital, both nurses and lawyers would be lumped together as “professionals,” even though their duties require different levels of education, skills and experience that merit different pay. The Obama administration’s proposal “fails to account for these and other legitimate, non-discriminatory factors that affect employee pay,” the Chamber argued.