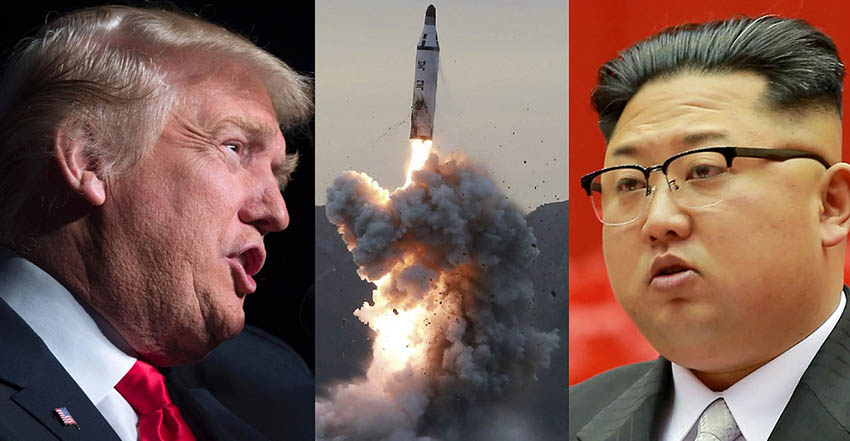 Amid growing missile threats from North Korea, American missile defenses based in Alaska, California, and Guam, as well as on Navy ships, are capable of knocking out North Korean nuclear missiles, according to military leaders and experts.

“Yes, we believe that the currently deployed ballistic missile defense system can meet today’s threat, and we’ve demonstrated that capability through testing,” Greaves told a conference in Alabama.

Yet other shorter-range defenses such as the land-based Terminal High Altitude Area Defense, or THAAD, and the Navy’s ship-based Aegis SM-3 missiles can knock out medium and intermediate-range North Korean missiles, and if given enough satellite warning could attack North Korea’s ICBM warheads, he said.

“Any interceptor can intercept any missile, given the right parameters,” Obering said in an interview.

“I have high confidence that if we were attacked by North Korea we would be able to defend ourselves.”

North Korea responded by announcing that an attack on the American Pacific island of Guam is being considered.

On Wednesday, the official KCNA news agency dismissed Trump’s warning as a “load of nonsense.”

“Sound dialogue is not possible with such a guy bereft of reason and only absolute force can work on him,” the state media organ said.

“The United States and our allies have the demonstrated capabilities and unquestionable commitment to defend ourselves from an attack,” Mattis said.

Noting the unified vote condemning North Korea at the United Nations on Saturday, Mattis said “Kim Jong Un should take heed” of those who agree North Korea poses a threat to global security and stability.

North Korea “must choose to stop isolating itself and stand down its pursuit of nuclear weapons,” he said, adding that Pyongyang “should cease any consideration of actions that would lead to the end of its regime and the destruction of its people.”

Mattis said Trump was notified of the growing missile threat and his first orders were to emphasize the readiness of both missile defenses and nuclear deterrent forces.

The defense secretary added that the “combined allied militaries now possess the most precise, rehearsed and robust defensive and offensive capabilities on earth,” and noted that the Kim Jong Un regime’s actions “will continue to be grossly overmatched by ours and would lose any arms race or conflict it initiates.”

Air Force Gen. John Hyten, commander of U.S. Strategic Command, said recently that he is concerned about growing missile threats from both North Korea and Iran and wants better sensors and interceptors for missile defenses.

“I’m concerned about any missile threat that is growing and can either range our allies or the United States,” he said in Omaha last month.

“But when I look at where we need to invest in future missile defenses, I see the most important thing that we have to invest in right now would be increased sensor capabilities because we need to be able to characterize the threat wherever it is on the globe in order to be able to effectively respond to it with defenses.”

Hyten also favors adding sensors in space “because you can’t have access to enough land points in the world to have a full sensor capability, so we need to go to space.”

Next is the need for improved interceptors.

“We have interceptors right now that are good enough to deal with the basic North Korean threat that is out there right now,” Hyten said. “But the threat is maturing fast and we have to improve our interceptor capability fast enough to stay with them.”

The Pentagon is developing an advanced kill vehicle that will be added current interceptors in Alaska and California. New technology is also available to deal with maneuvering warheads.

Hyten said he would favor building space sensors and better interceptors before setting up a third based on the East Coast for the Ground-based Midcourse Defense.

The Pentagon is currently conducting a major review of ballistic missile defense policy that will set the course of current and future defenses.

“There’s a ballistic missile defense review underway right now that will say where we have to go in terms of capacity, whether it’s more in the West, more in the East,” Hyten said.

“But I continue to advocate to make sure we don’t in the discussion on capacity miss the need for improved sensors and improved interceptors that will really enable decisions we have coming out of the review.”

The ground based missile defenses that would be used against a North Korean ICBM include 36 interceptors mainly based at Fort Greely, Alaska with a smaller number located at Vandenberg Air Force Base in southern California.

The interceptors are equipped with kinetic kill vehicles that travel at very high speeds and ram into enemy warheads in space.

Command centers are located in Colorado Springs and Fort Greely.

Obering said the command and control for missile defense is highly automated because of the need to respond very quickly to a missile launch by North Korea that would be spotted by special military satellites focused on North Korea.

Once detected the system predicts an “impact fan” of potential target areas and if the track indicates it is going to hit the continental United States, Alaska or Hawaii.

“If that fan touches any of the defended area that is programed into the Ground Based Midcourse system, the system automatically alerts,” Obering said.

The alert notifies commanders that a missile is inbound heading for a specific area. Then electronic sensors around the world, including radar, begin searching for the missile.

The sensor information is then fed into the fire control system that assesses which data is more reliable and selects an interceptor to attack the warhead.

“The system then determines what would be the most optimum shot, either from Vandenberg or Alaska,” Obering said. “The human has to enable it. It has to say, ‘Ok, you’re authorized to launch.’ But everything else is done automatically.”

For Guam, currently a THAAD battery is deployed to the island and Aegis missile defenses ships also are likely being deployed near the island in the event North Korea would attempt to strike the island.

North Korea has three ICBMs, the Taepodong-2, Hwasong-13, and Hwasong-14. Those would not be used for strikes on Guam. Other medium-range or intermediate range missiles such as the Musudan or Hwasong-12 could be used.

Those missiles can be countered by THAAD and Aegis ships.

The MDA budget should be increased to $10 billion to $12 billion annually, he said.

For example, in addition to using space satellites for warning, satellites should be used for tracking in order to provide more precision for missile defenses.

“When you do that, you get dramatically improved sensor coverage,” Obering said. Space based sensors would bolster the three most effective missile defenses: GMD, THAAD and Aegis.

Another step to increase the lethality of missile defenses would be to use what is called cooperative engagement capabilities—the ability to use multiple tracking and guidance sensors on various missile defense systems.

For example, the Navy’s SM-3 missile has a range greater than the Aegis radar and thus could be extended by using data from other longer-range radar.

“That’s what we mean by an integrated system—the ability to take any sensor and marry it with any interceptor,” Obering said.

Cooperative engagement has been tested several times and more are scheduled.

Without missile defenses, there would be only two options for military commanders: preemptive attacks or retaliation after being attacked.

“And now we have another option and that’s very critical,” Obering said.