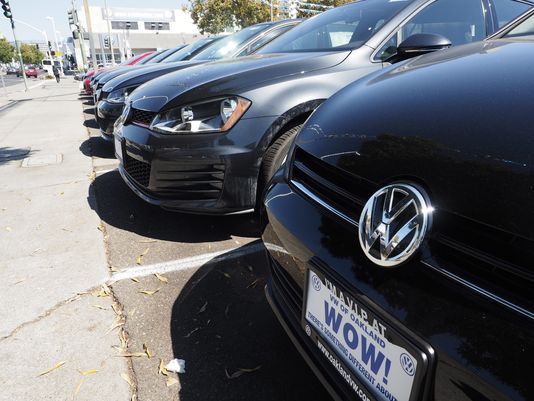 Since Volkswagen admitted in September 2015 to illegally using software to evade emissions regulations, the EPA has been investigating diesel issues in a number of other automakers including Fiat Chrysler Automobiles NV <FCHA.MI> and Daimler AG <DAIGn.DE>.

In March, VW pleaded guilty to three felonies in a U.S. court and faces three years of probation and oversight by a court appointed monitor. The automaker has agreed to spend more than $25 billion on buybacks, fines and environmental efforts.

The U.S. Justice Department sued Fiat Chrysler Automobiles NV in May and accused the Italian-American automaker of illegally using software to bypass emission controls in 104,000 diesel vehicles sold since 2014.

“What VW did was very, very troublesome and we need to make sure it doesn’t happen again,” Pruitt told Reuters in an interview late Monday.

Pruitt said the agency must take an aggressive stance to deter cheating by automakers.

“Look what VW, and Fiat – you have this Fiat case that is on the horizon as well. The emails and the communications that I’m aware of – it was strategic and intentional and should be dealt with very aggressively,” Pruitt said.

Asked whether he thought the Obama administration dealt with Volkswagen too harshly, Pruitt responded: “I wouldn’t call what was done too light at all.”

Reuters reported in May the Justice Department and EPA obtained internal Fiat emails and other documents written in Italian that look at engine development and emissions issues and that raise significant questions.

The Justice Department suit in May named Fiat Chrysler’s unit VM Motori SpA, which designed the engine in question.

Fiat Chrysler Chief Executive Sergio Marchionne said in June the automaker has been working with EPA for months and “is confident of the fact that there was no intention on our part to set up a defeat device that was even remotely similar to what (Volkswagen) had in their cars.”

Pruitt added in the interview that the EPA is not currently reviewing California’s waiver under the Clean Air Act to set its own vehicle emissions rules.

“We’ve reached out to the California governor as part of our CAFE midterm review in 2018. I’m hopeful that the state of California, the governor there, will respond with reciprocity and we are working through that process,” Pruitt said.

Pruitt said he thinks it is important to have talks with California as they consider whether to revise the 2022 through 2025 vehicle emissions rules.