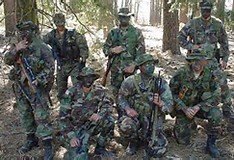 JACKSON, Ga.
In the woods south of Atlanta, John and Yvette DeMaria are with about a dozen camouflage-wearing, heavily armed Americans huffing and puffing as they scramble to navigate the sprawling piece of property where they train, one weekend a month, to ward off enemies — foreign or domestic.

The DeMarias are with the Georgia Security Force militia, whose members are relieved that Donald Trump won the presidency but believe it would be a mistake to lay down their arms just because he is in the White House. So they continue to take to the woods to be ready for whatever may come, whether it’s an economic crisis that spawns unrest or Islamic extremists carrying out attacks on American soil.

“I started to realize that I got very angry because the system has been so abused over and over and over again, making rights out of thin air for people who don’t deserve to get anything,” said John DeMaria, who goes by the nickname Rooster J.

While it is impossible to track all the groups that often are no more than a handful of men gathering in woods, experts says that militia activity tends to fall off under Republican presidents and ramp up under Democrats. But just as last year’s election upended conventional models, those who watch militias say life in the Trump era may not follow the same patterns.

If anything, it could be a potential powder keg, if those feelings of having a kindred spirit in Trump erupt into a sense of betrayal if he fails to deliver on his promises.

“What would concern me is that nobody gets more angry than a fan spurned,” said James Corcoran, a professor at Simmons College in Boston who has watched militias closely for decades and has written extensively about the movement.

The leader of the Georgia Security Force, Chris Hill, remains deeply skeptical of Congress and worries the lawmakers will undermine Trump’s agenda: preventing him from building a wall on the Mexico border, repealing “Obamacare” and fulfilling his promise to “Make American Great Again.”

“Even if President Trump is able to do the things that he wants to do, he’s still got Congress to contend with. Congress is the same old dog-and-pony show. All they do is fight. They’re never going to grant us more freedom,” said Hill, who goes by the nickname General BloodAgent.

“A lot of people have let their guard down because he was elected, and I would wholeheartedly say that is a big mistake. … If anything we should use this time wisely. Like the Good Book says, a wise man prepares, a fool takes his chances.”

Modern-day militias began to surge in the 1990s during the Clinton administration, then ebbed during the Bush years. Following a dramatic spike after the 2008 election of President Barack Obama, there are now an estimated 165 militias in the U.S., according to Ryan Lenz, a senior investigative reporter with the Southern Poverty Law Center.

For Hill and his group, the 2008 election was their defining moment, the one that signaled the U.S. was on the wrong track. They believed Obama wanted to restrict gun rights and forever alter their way of life.

Yvette DeMaria said she and her husband were looking for “like minds” and found the Georgia Security Force through Facebook and a pastor friend who had traveled to Gatlinburg, Tennessee, with the militia to help out after fires in the Smoky Mountains devastated the region. That act of charity had moved her.

Even before Obama was elected, the DeMarias felt the country was heading down the wrong path, with the military and law enforcement no longer cherished or revered. Yvette DeMaria said she believes protesters have been allowed to get out of control after police shootings.

Political correctness has run amok, she said, with politicians and the courts carving out constitutional protections that strayed far from the intent of the nation’s forefathers. She laments, for example, the legalization of same–sex marriage and the transgender bathroom issue, believing they amount to a war on her Christian faith.

“We cannot be silent anymore. We have voices. We need to rise up. We need to speak up. We need to find like minds,” Yvette DeMaria said. “We’re going to church every Sunday — but Monday through Saturday, what are we doing?”

She and her husband found their mission and some like-minded people in the militia, which is part of the Three Percenters movement. It derives its name from the belief that just 3 percent of the colonists rose up to fight the British. They have vowed to resist any government that infringes on the U.S. Constitution.

While focused on training, the militia is also social.

In the woods, they use hand signals and walkie-talkies to alert the others to where and how many enemies are lurking, They then navigate obstacles made of firehoses, logs and scraps of wood, metal and string to eliminate the threats.

The first two runs are “dry fire” exercises; the guns aren’t loaded. The last exercise of the day involves live rounds in their weapons — from AR-15s to handguns. After the targets are riddled with holes, the militia members gather around a fire at a campsite a short walk away to enjoy music and a barbecue.

For Hill, a paralegal by day, the Trump election was a defining moment to be celebrated.

“We’re being called Trump militia. It’s something I’m probably going to wear as a badge now,” Hill said. “I feel a connection to President Trump.”