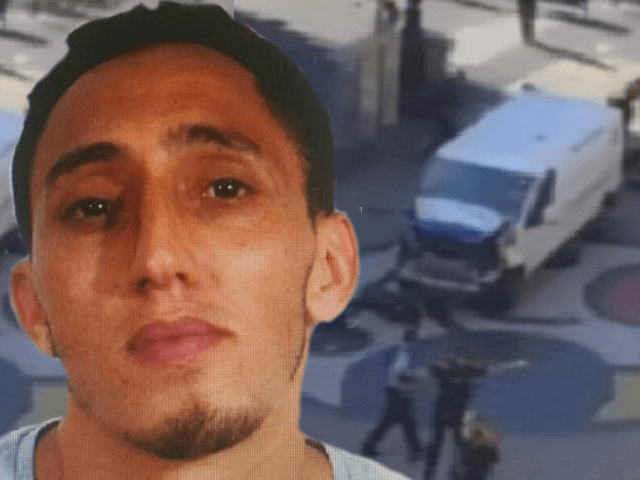 Spanish police have confirmed a rented truck has struck a crowd on a popular tourist street in central Barcelona in what they are calling a “coordinated terrorist attack”, with the regional interior minister confirming 13 dead and 50 injured.

Update, 14:50 PM EST: A photograph of the suspect in custody, Driss Oukabir, has been released by the police:

According to Heavy.com, Oukabir is a Moroccan from Marseilles. Several media outlets have said he is the gunman taken into custody after seeking refuge in a nearby restaurant, but otherwise his exact role in the incident is not yet clear.

“A Facebook page that appeared to be the suspect’s gave his name as Driss Oukabir Soprano and said he lives in Ripoli and is from Marseilles, France; the page shared anti-Semitic posts, a post about Muslim reaction to Christianity, and Moroccan music videos,” the Heavy report says, citing Spanish and French media who said the Facebook page is authentic, although the authorities have not certified that yet.

Update, 14:45 PM EST: The Spanish Royal Family tweeted a defiant message to the attackers. Translated into English, it reads: “They are assassins, simply criminals who are not going to terrorize us. All of Spain is Barcelona. La Rambla will be back for everyone.”

Hours after the incident, three police officers were run over on the Barcelona Avinguda Diagonal, another major thoroughfare in the city roughly a mile away, as a car attempted to overrun a checkpoint. Spain’s El Mundo reports it is unknown whether the second incident is linked to the earlier fatal attack.

According to reports, the van involved in the incident left the road and entered the pedestrianized area of the walk and drove through the crowds until it crashed into a kiosk. Spanish police were quick to identify the incident as a “terrorist attack” and said the attackers had fled the scene.

Local media had reported earlier that the two attackers were “entrenched” in a bar in the nearby Raval de Barcelona district, however, this was subsequently revealed to be incorrect. The men are reported to be armed, but Spanish emergency services denied there has been a gun battle on Twitter.

Some two hours after the attack took place, it was reported police had made an arrest, with unconfirmed footage of one taking place circulating on Twitter.

France24 reports a passport was found in the attack vehicle belonging to a man with an “Arabic surname”, while local broadcaster TeleMadrid and elPeriodico reports the name of the man who hired the van involved in the attack as Driss el Ouakbir.

Police operation underway in Barcelona / AFP Image
El Mundo quotes “police sources” who told the paper there were “at least” 13 dead after the attack. Footage posted to social media after the attack shows scenes of carnage, with dozens of victims strewn across the street receiving first aid. Police have so far confirmed one fatality.

Police evacuated the La Rambla pedestrianized street in Barcelona Thursday afternoon, as shop keepers closed their roller-shutters with customers inside to protect them from events outside, reports local newspaper La Vanguardia. All local railway stations have been closed.

An English-language tweet by the official account of the Catalan police declared there had been a “massive” incident by a “person with a van” and that “there are injured”. Subsequent messages in Spanish instruct followers to avoid the La Rambla area and for civilians to not obstruct the work of the emergency services.

Police have gone door to door in the area ordering businesses to shut their doors and to keep customers inside. A tweet from the Catalan emergency services account instructs people to “stay inside” until told otherwise by officers.

Politicians are beginning to respond to the situation, with a White House official remarking “The Chief of Staff is aware of the situation, and keeping the President abreast”, and Austrian Foreign Minister Sebastian Kurz taking to Twitter to call it a “brutal act of terror”.

Terrible news from #Barcelona. I condemn in the strongest terms this brutal act of #terror against innocent people. 1/2