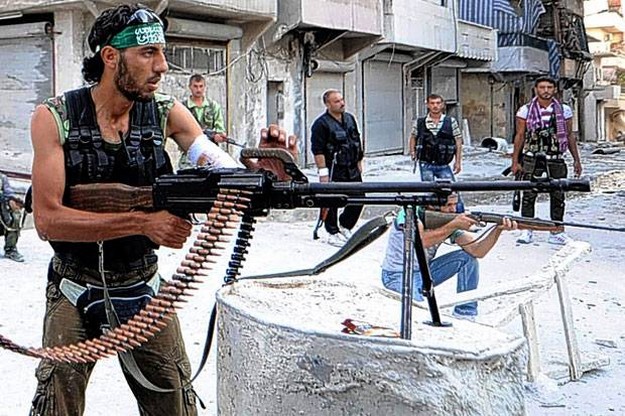 The United States is inching closer to involvement in the Syrian civil war after U.S. forces shot down a Syrian fighter jet on Sunday.

The incident is the fourth time in as many weeks that the United States has shot at pro-Syrian-government forces, and it carries the potential for further escalation — particularly with Russia threatening to target U.S. aircraft that fly into parts of Syria.

A statement from the U.S. military said it shot down the Syrian SU-22 in self-defense and after contacting Russian counterparts through the established deconfliction zone. The Syrian aircraft was bombing U.S.-backed forces fighting the Islamic State in Iraq and Syria (ISIS) south of Tabqa.

On Monday, Russia responded by saying its surface-to-air missile systems in Syria would begin to track manned and unmanned aircraft from the U.S.-led anti-ISIS coalition if they go west of the Euphrates River.

U.S. officials then sought to tamp down the tensions.

“The worst thing any of us could do right now would be to address this thing with hyperbole,” Chairman of the Joint Chiefs of Staff Gen. Joseph Dunford said during an event at the National Press Club. “An incident occurred. We have to work through the incident.”

Dunford also said the U.S. would be working to re-establish the “deconfliction” zone with Syria.

Robert Ford, a former U.S. ambassador to Syria, said there is real danger to the U.S. as tensions flare.

Syrian President Bashar Assad has vowed to recapture all Syrian territory lost during the nation’s civil war, Ford noted in an email.

“There is, therefore, a real risk of escalation, especially if, unlike in western Syria, the Americans insist on backing up their Syrian allies on the ground and there is no deal with Assad,” he said.

Other incidents in which the U.S. has fired on Syrian forces centered on Al Tanf, where the U.S. military is training its partnered local forces.

On May 18, the United States conducted airstrikes on an Iranian-backed pro-government militia that it said came within the established deconfliction zone around the training base.

That was followed on June 6 by another strike against an Iranian-backed militia when it came into the deconfliction zone with a tank, artillery, anti-aircraft weapons, armed technical vehicles and more than 60 soldiers.

Two days later, the United States shot down an armed drone after it fired a dud munition at U.S.-led forces. U.S. officials have not said who was operating the drone but have said it was made by Iran.

After each incident, the U.S. military has insisted it only took action in self-defense and that it has no intention of getting further embroiled in the Syrian civil war.

“The coalition’s mission is to defeat ISIS in Iraq and Syria,” the military reiterated in its statement after Sunday’s jet downing. “The coalition does not seek to fight Syrian regime, Russian or pro-regime forces partnered with them, but will not hesitate to defend coalition or partner forces from any threat.”

U.S. and Syrian forces largely had stayed out of each other’s way before, because the United States operated mostly in eastern Syria and the government forces mostly in western Syria.

But since the fall of Aleppo, pro-Assad forces have been moving further east, bringing them into closer proximity with the U.S. forces and upping the potential for confrontation, said Ford, a senior fellow at the Middle East Institute and professor at Yale.

“The escalation may be asymmetrical,” he said. “Assad’s air force can’t challenge ours. Look instead for car bombs, ground ambushes and small-scale, regular attacks against our forces and those we back in eastern Syria. The Syrian government is very experienced at testing the edges of any envelope or red line.”

Nile Gardiner, director of the Heritage Foundation’s Margaret Thatcher Center for Freedom, doubted Moscow would follow through on its threat. Russia, for instance, did not retaliate militarily after Turkey shot down its jet in 2015, he noted.

He called the U.S. military’s decision to shoot down a Syrian jet a “welcome development.”

“Washington has sent a clear message to Moscow that it’s no longer business as usual,” he said. “For too long, the Russians have treated Syria as their own backyard.”

But even if neither Russia nor the United States wants to get dragged further into war, they could be “chain ganged” to their allies who are jockeying to control land taken from ISIS, said Stephen Biddle, adjunct senior fellow for defense policy at the Council on Foreign Relations.

Other experts worry about the U.S. military attacking pro-Assad forces without a larger Syria strategy from President Trump.

Danielle Pletka, senior vice president for foreign and defense policy studies at the American Enterprise Institute, has advocated for more U.S. involvement in the civil war. But she expressed alarm at the United States shooting down the Syrian jet and attacking militias at Al Tanf without a larger strategy.

“My biggest concern is not escalation, although I agree that there’s a real risk,” she said. “Escalation toward a particular end is a good thing. Escalation for no reason with no particular goal is not.”