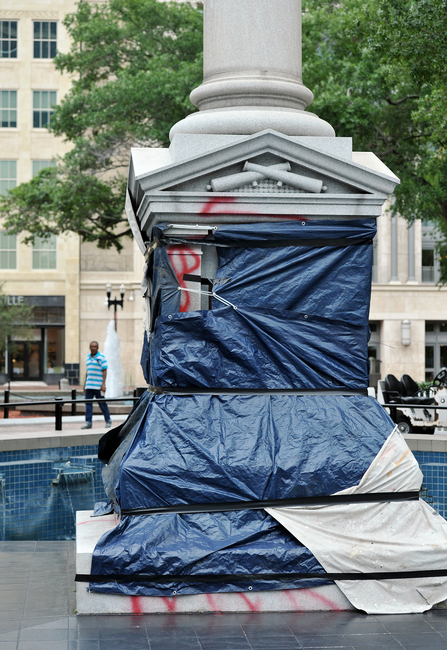 Cowardly vandals defaced two Confederate monuments in Jacksonville, Florida this week as the city debates the fate of the structures in the wake of racial violence in Charlottesville, Virginia last month.

Local groups debated for months about whether the city should remove a 63-foot tall granite monument dedicated to Confederate soldiers in Hemming Park, as well as a statue dedicated to women in the Confederacy in Confederate Park in Springfield, The Florida Times-Union reports.

On Tuesday night or early Wednesday, some folks opposed to the monuments voiced their take on the situation with red spray-painted messages “KKK,” “free slaves,” and “free KKK” scrawled across the statues and an accompanying fountain.

According to the Times-Union:

At Hemming Park, the words “KKK,” “free slaves” and “free KKK” were painted in red on the base of the monument, while “KKK” was painted on a tile ledge that borders a fountain surrounding the monument.

At Confederate Park, “KKK” was painted in red on several columns and on the statue.

The Jacksonville Sheriff’s Office refused to discuss the incident with the news site.

Late last month, locals flooded a Jacksonville City Council meeting to argue for and against removing the monuments, WJXT reports.

The comments came a week after City Council President Anna Lopez Brosche requested an inventory of city monuments, and said she planned to file legislation to remove those tied to the Confederacy.

“I am for the removal of the monuments. And I will admit, like many people, that I didn’t think a thing about it until I learned that most of these monuments went up during the period of Jim Crow and were basically a way of frightening people,” resident Lara Ragunas said.

Anita Walker, another local, said the statues belong in a museum.

“I support removing the Confederate statues as a Marine Corps veteran,” she told the Council. “I believe they should be paid tribute to in a museum, not on the streets of America.”

Others strongly disagreed, of course.

“If they’re in a museum, the very limited number of the population will see them unless something is broadcasted about them,” Mark McQueen said. “But every time someone drives by Hemming Park, they see that and can bring a remembrance to them about the things that did happen.”

Proponents for removal also threatened that if the city did not remove the structures, there would be serious consequences.

City Councilman Reginald Brown, a black man advocating for removal, told the Times-Union that the council’s failure to act, not the rouge vandals, are to blame for the recent graffiti.

“This is what happens when you don’t make a command decision. I think we’re taking way too long,” he said. “I believe it’s time to get our hands on this matter. Vote it up or down.”

Brown contends that the lingering debate about the Confederate memorials is contributing to “hatred resonating” through Jacksonville, and he pointed to an apparent rise in folks flying Confederate flags he views as “just as offensive as a swastika.”

Meanwhile, a group called Save our Southern Heritage commissioned a poll of area residents after the clashes in Charlottesville, Virginia, and organizer Seber Newsome III said results showed 77 percent of Jacksonville residents want to keep the Confederate monuments in place.

That group is now pressuring the city council to hold a public vote on the matter.

“They can wash their hands of the situation and say, ‘Well, that’s the will of the residents of Jacksonville. That’s what they want. We’re here to serve them. Let’s do what they want.’ If the people vote to remove the monuments, so be it,” Newsome said. “If they vote to keep them, then keep them there.”