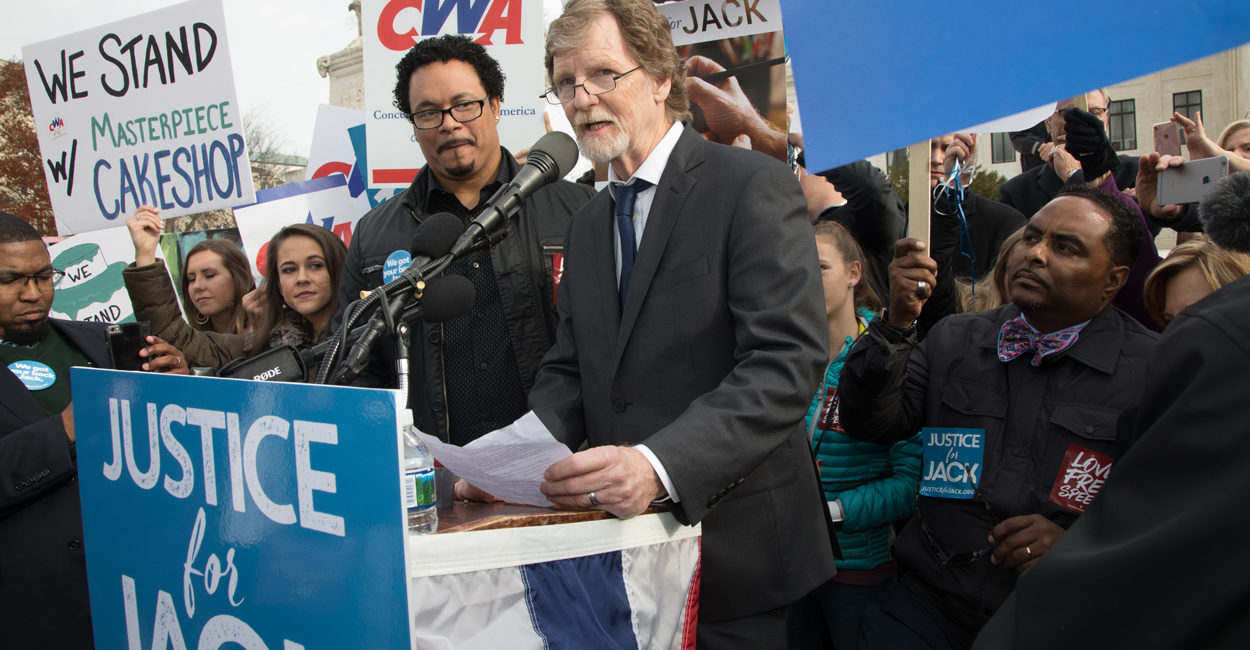 Christian and conservative leaders rallied Tuesday in support of a Colorado baker whose case was being heard at the Supreme Court for declining to make a custom wedding cake for a same-sex ceremony.

“Jack [Phillips] is simply asking the Supreme Court to protect his freedom of speech as a creative professional so that he does not have to express a message in his cake design that conflicts with his religious convictions about marriage,” Jennifer Marshall, vice president of the Institute for Family, Community, and Opportunity at The Heritage Foundation, said at the rally on the steps of the Supreme Court.

“That freedom of expression is something that all creative artists value, no matter what their political and religious viewpoints [are],” she said.

Phillips, owner of Masterpiece Cakeshop in Lakewood, Colorado, declined to make a custom cake for a same-sex wedding in July 2012.

The Supreme Court heard oral arguments in the case Tuesday, with a decision expected at the end of June, according to Elizabeth Slattery, a legal fellow at The Heritage Foundation.

Ryan Bomberger, founder of the Radiance Foundation, a nonprofit educational organization to affirm life, says Phillips’ case involves much more than just the rights of a cake baker.

“I am adopted,” Bomberger said, adding:

And people don’t realize how far-reaching a lot of these issues go when it comes to LGBT activism. In fact, in the state of Illinois, they passed [a law] where if you are not LGBTQ-affirming as a parent, you can’t be a perspective foster care parent.

Instead, Bomberger said, Phillips’ case is about every American’s First Amendment rights.

#MasterpieceCakeshop is #OpenToAll. Jack Phillips serves all people but cannot create all art. #FreedomofExpression cannot and should not be denied based on viewpoint. The #FirstAmendment deserves better. #OpenToAll #JusticeforJack @ryanbomberger pic.twitter.com/q2iXgird1P

Ryan T. Anderson, a senior fellow in American principles and public policy at The Heritage Foundation, said Phillips’ case boils down to freedom.

Some speakers at the rally had stories similar to that of Phillips. Kelvin Cochran, a former fire chief in Atlanta, said he was dismissed from his job because of his faith. Cochran had written a religious book that included his beliefs about sexual morality.

Former Atlanta Fire Chief Kelvin Cochran was fired–not for ever discriminating against anyone on the job–for writing a devotional book (on his own time) for men that mentioned the Biblical mode of marriage. He's got Jack's back. #JusticeForJack #WeGotYourBackJack pic.twitter.com/s3hHObmbYX

Cochran told the crowd that society must defend Phillips’ rights.

“In our country, genuine tolerance must be reciprocal,” Cochran said, adding:

No one deserves to be marginalized or driven out of their profession because of their faith. It is because of faith and patriotism that American dreams are possible. Without faith, the Constitution has no basis for dreams coming true. Today, I proudly stand with Jack Phillips.

“This Supreme Court is running this country, and we need to get them back to the Constitution itself,” Rep. Steve King, R-Iowa, said. “Jack Phillips, a man of deeply religious belief, a noble man … has said, ‘I will let any man come in and buy any cake off my shelf, anything in our inventory … ,’ but he has said that he will not violate his convictions … . He has that right.”

Rep. Steve Russell, R-Okla., said attacks on religious liberty are a result of a lack of respect for the Constitution.

“In the last 50 years, we have seen the Constitution used … to kill American children in the womb, eliminate family structure, elevate behavior over belief, redefine marriage, and assault … any who should oppose them,” he said.

Phillips’ situation, Russell said, is an example of how far society will go to attack citizens’ constitutional rights.

“Not satisfied, we now see them without rest on their quest to eliminate the public and free exercise of faith in the United States,” he said. “Not on our watch.”

Kristen Waggoner, a lawyer with the Alliance Defending Freedom who is representing Phillips, told reporters outside the Supreme Court after the oral arguments that Phillips’ case is important.

Kristen Waggoner, speaking outside the case, smiled broadly when asked if she thought Justice Kennedy was swayed: “Dignity cuts both ways” pic.twitter.com/jzA50JBKnL

“Colorado’s position was so extreme today that it said that the state could actually compel all kinds of artists, filmmakers, photographers, graphic designers, who are paid, to express messages that violate their core identity,” Waggoner said. “This court has never, never compelled artistic expression … and if it does so now, we will have less civility, less pluralism, and less diversity in our society.”

The American Civil Liberties Union, which was also represented outside the court during oral arguments, said in a tweet that a victory for Phillips would promote discrimination.

We don’t want to live in a country where businesses can hang “heterosexuals only” signs in the window. #MasterpieceCakeshop #OpenToAll pic.twitter.com/tW33877fdw

Cochran, the former Atlanta fire chief, however, said the Masterpiece Cakeshop decision is about freedom.

“I hope the Supreme Court upholds the Constitution and protects the freedoms of all Americans to be able to peacefully speak, live and work … without threat of being punished by the government,” Cochran said. “Those of us who have gone through these fiery trials, we have a motto, ‘Our back is not against the wall, we are not at the end of our rope, and throwing in the towel is not an option.’ We stand with Jack.”