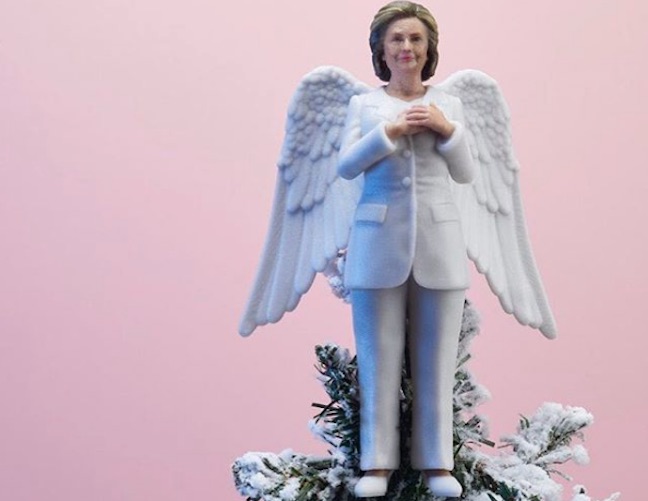 Liberals specialize in ruining holidays and they put the most effort into Christmas, which is the most hated of all on the left. Usually these attempts involve trying to associate a holiday with genocide or racism, but they found a new way to make the season as horrifying as possible. There is an actual Hillary Clinton Christmas tree topper and yes, it’s for sale. Not only will this give your kids the heebie jeebies, it’s guaranteed to scare off Santa as well.

A company called Women To Look Up To has come up with three Christmas tree toppers; Serena Williams, Beyoncé, and Hillary Clinton. Even from a lefty feminist point of view, it seems weird that this company figured these were the three most important female role models out there. Apparently the company selected the first two and Hillary was voted in by the public. Hey, she finally won an election.

All three of these toppers are presented as if they are angels. I’m not here to pass judgement on Williams or Beyoncé, but I have to believe that Hillary is in league with Satan. It’s the only thing that explains why she’s so rich without working for it or how she is somehow not in prison.

And if you think that’s bad, check out this headline from Metro News: Celebrate ‘Resistmas’ this year with these badass women on top of your Christmas tree

I imagine if this is a Hillary-based holiday, it must involve lying, crying, and blaming everyone else for you own faults. I’m also pretty sure at some point during the festivities you have to excuse your husband for raping and groping women. Then you cap things off by selling out your country and taking kickbacks.

I don’t know how much these things cost and I don’t care. Anything is too much and in fact even if they were paying people to take them I’d still decline one. I do imagine there are plenty of sad liberals who would get them if they weren’t so morally opposed to Christmas. It’s kind of hard to top your Christmas tree with Hilary when you think the holiday is representative of American imperialism and genocide as well as a celebration of racism and don’t have a tree.

(By Brian Anderson and reported by the Downtrend)  https://downtrend.com/71superb/what-better-way-to-ruin-christmas-than-with-a-hillary-clinton-tree-topper  (December 6, 2017)