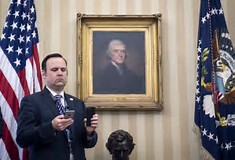 Washington (CNN) Senior White House aide Dan Scavino was reprimanded by the US Office of Special Counsel for violating the Hatch Act in a tweet, according to a letter posted by a Washington watchdog group.

The letter addressed to the Citizens for Responsibility and Ethics in Washington states that Scavino, the White House director of social media, violated the Hatch Act on April 1 when he sent a tweet calling for the defeat of GOP Rep. Justin Amash in a primary.

The Hatch Act prohibits employees in the executive branch, except the President, Vice-President and some other high-level officials, from engaging in political activity.

In its letter to CREW, the Office of Special Counsel said that Scavino received a “warning letter” and “if in the future he engages in prohibited political activity while employed in a position covered by the Hatch Act, we will consider such activity to be a willful and knowing violation of the law.”

The White House has not yet responded to CNN’s request for comment. OSC said it “cannot comment” on the letter.

Scavino’s tweet came on the heels of President Donald Trump’s taking to Twitter in April to call out the conservative House Freedom Caucus, which Amash is a member of, for not supporting his plan to repeal and replace Obamacare.

Amash was among the Freedom Caucus members who pushed back against the President, tweeting that Trump had surrendered to the Washington swamp he promised to fight. He eventually voted for the final bill.

“The rules are clear that government officials aren’t allowed to use their position for campaign activity,” CREW Executive Director Noah Bookbinder said in a statement. “OSC has made clear with this ruling that they are going to enforce these important rules and work to keep the government free from inappropriate politics.”