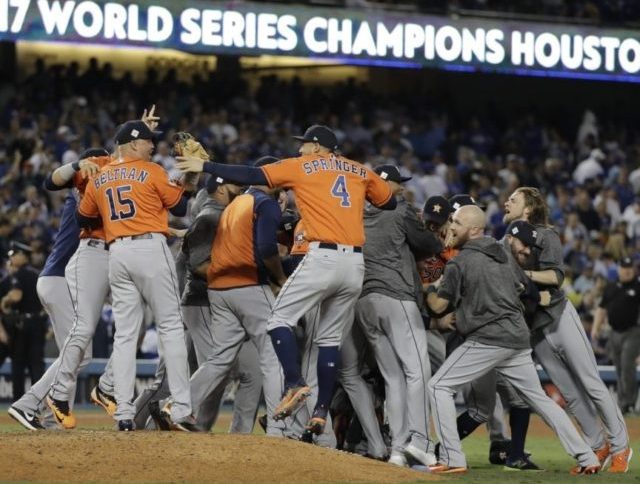 The Game 7 audience joined  last year’s Game 7 as the two most watched baseball games since 2002. Both offered a safe haven from protests.

From the Dodgers’ Game 1 win behind Clayton Kershaw to the Astros 5-1 win in Game 7 behind MVP George Springer’s record fifth World Series home run, YouTube TV sponsored the World Series with graphics behind home plate that made it appear to all viewers they were watching the game on YouTube already. The tech behemoth produced a catchy commercial making the case you could cut the cord and watch TV via YouTube for just $35 per month. Business Insider called the ad brilliant, showing a tweet of a viewer stating they wanted to reach out and touch the YouTube play button behind home plate.

Deadline Hollywood notes the overnight ratings for Game 7 were just 25 percent behind last year’s historic Cubs’ Game 7, which shocked all by pulling in 40 million viewers. This figure suggests last night’s game could be close to 30 million. Combined with the 22.29 million who watched Game 6 that increases the  average viewership for the last 14 World Series games right around 21 million per game. One way to look at this is that five or six million TV viewers moved to the World Series from the NFL over the last two years. Even Game 6 had more than 26 million viewers by the end, but they lost viewers in the early innings to Halloween trick-or-treat to pull the overall average for the entire game to 22.29 million.

Deadline’s summary indirectly debunks liberals arguments that the NFL plunge from around 20 million to close to 15 million during the two seasons of nnthem protests has nothing to do with the kneelers, as those fans seemingly migrated to other entertainment, or maybe even yard work, as well as taking baseball to new heights. Deadline writes:

Last night’s game ranks as the second highest rated baseball broadcast since the 2002 Game 7 between the San Francisco Giants and the Anaheim Angels. It is also the second best broadcast on TV in general since the Oscars back in February.

A 15-year ratings high for Fox in the early numbers, that historic Cubs Game 7 win of last year went on to deliver a 12.6/39 rating among adults 18-49 and a massive viewership of 40.045 million. The latter result is the best any baseball game has done since 1991.

Compared to the Game 6 of Halloween night when the Dodgers won and kept the City of Angels World Series sweet tooth fed, last night’s game rose by 25% in MM ratings. In the final numbers, that October 31 Game 6 snagged a 6.0/23 rating in the key demo and 22.29 million viewers.

The final number will vary based on more complete data, but Deadline’s reported 18.8/31 metered market result for last night’s game indicates that 18.8 percent of TVs in their study had the game on, which was 31 percent of the people watching TV at the time.  The ability to reach the eyeballs of almost one in three Americans with a TV on in a day of hundreds of options is a major coup for baseball.