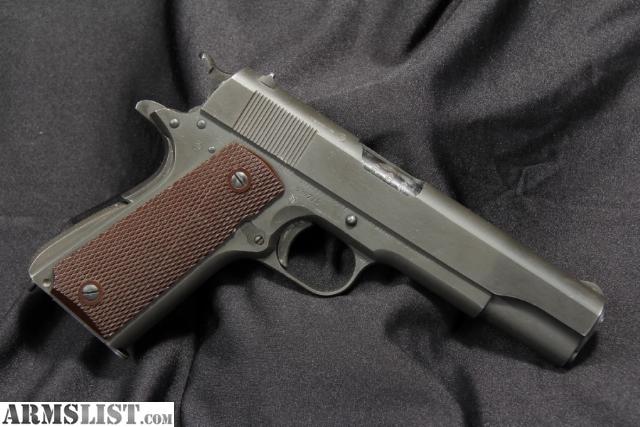 The Civilian Marksmanship Program may be getting thousands of WWII era M1911 pistols to sell to the public. This is courtesy of a clause in the 2018 NDAA bill, HR 2810, which has passed the House, and directs the Secretary Of Defense to approve the transfer.

The United States House of Representatives has just passed their version of the 2018 National Defense Authorization Act (NDAA), and included within it is a provision that will mandate the release of all M1911 handguns currently in US Army inventory to the Civilian Marksmanship Program, for distribution to eligible US civilians. The new bill would overwrite the 2016 NDAA, which allowed for the release of 10,000 of the pistols, but did not mandate it. The text of Section 1064 of the 2018 NDAA is as follows:

SEC. 1064. TRANSFER OF SURPLUS FIREARMS TO CORPORATION FOR THE PROMOTION OF RIFLE PRACTICE AND FIREARMS SAFETY.

(1) by striking “(1) Subject to paragraph (2), the Secretary may transfer” and inserting “The Secretary shall transfer”;

(2) by striking “The Secretary shall determine a reasonable schedule for the transfer of such surplus pistols.”; and

This is a modification of the 2016 NDAA, which Obama signed, which granted the sale of the classic sidearm, but did not mandate it. The 2016 version also limited the number of annual transfers to 10,000. Of course none were actually transferred.

This year’s language, however, would effectively make the transfers mandatory and would remove the yearly cap. Currently, the military has some 100,000 excess 1911s sitting in storage at taxpayer expense. Transfer of these historically-significant firearms would ease a burden on the government’s heavily indebted balance sheet and help preserve important artifacts from the era when the U.S. military defended Western Civilization from worldwide fascism and aggressive Communist expansion.

The CMP’s sales of 1911s would be treated as other retail sales under the federal Gun Control Act, including the attendant background checks and point of sale record keeping. The design of the pistols dates back to the late 19th Century, and they come equipped with a seven-round magazine. One would think this would render the sales harmless in the eyes of the “reasonable gun safety regulation” crowd, but we’re not holding our breath.

But there is still action to be taken. If the Senate’s version of the NDAA does not include this language, then it may be struck during the conference committee, where leaders from both chambers meet to resolve the differences between their 2 versions.