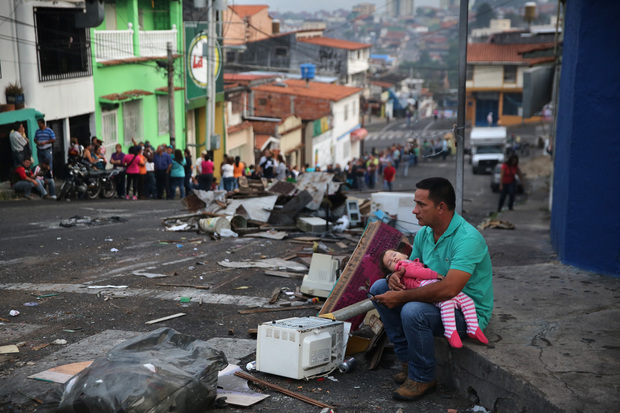 “But that’s not real socialism,” says every leftist sympathizer when confronted when the horrific reality of Venezuela’s collapse into an autocratic dystopia. But for those of us who don’t have our heads in the sand, Venezuela is a textbook example of what happens when socialism infects a country and purges any hint of private enterprise.

The people of Venezuela are suffering tremendously thanks to the Bolivarian socialist experiment. Hugo Chavez, the socialist state’s now-deceased founding father, once promised a flourishing utopia where children were merry and the poor were well-fed. Today, Venezuela is anything but joyous. It’s hell on earth.

Under Chavez’s handpicked successor, President Nicolas Maduro, Venezuelans are flooding the streets in protest against everything the socialist state stands for: poverty, destitution, starvation, suffering, and ideological slavery. Intent on preserving the socialist system by any means necessary, Maduro has consolidated power like a king and deployed the state’s security forces to beat down protesters. Before socialism suffocated the prosperity and freedom out of the country, Venezuela was a relatively successful state relative to its neighbors in Latin America. In 2017, Venezuela is a trash heap pitied by the entire region.

Here are five tangible ways socialism itself turned Venezuela into a trash heap:

1. State-imposed price controls limited the supply of basic goods by rendering production unprofitable. In order for Bolivarian revolution to fully materialize, the socialist state needed to have full control over the price of goods coming out of factories. As long as the oligarchs in government enjoyed the fruits of oil revenue, profit for businesses, both large and small, were considered antithetical to the socialist agenda. The proletariat had to have access to goods even if it meant producing those goods at a loss, demanded the socialist state. After incurring tremendous losses, many businesses shut down, unable to continue production. With nobody left to make basic goods, supply became scarce, naturally pushing up the price of goods. And at a certain point, only the richest of the rich could afford goods smuggled across the border and sold on the black market.

2. Venezuela became a single commodity market. By discouraging businesses to pursue profit, the socialist government pushed the economy back to the dark ages. Creativity died. Nobody was incentivized to produce anything of value or innovate. Luckily, Venezuela had a safety net: oil, lots of it. But the global oil market is fickle. It ebbs and flows. Prices drop and rise quickly. When your entire economy is reliant on one commodity, then your economic fate is intertwined with price fluctuations that are beyond your control.

3. Venezuela subsidized its unsustainable welfare state with oil revenue. State-run oil companies were responsible for producing the revenue necessary to subsidize the government’s extensive welfare programs. Under the socialist system, the poor were promised housing, education, healthcare and other wildly expensive benefits. To pay for all of this, the Venezuelan state sold oil in bulk overseas. But when the price of crude plunged, Venezuela went into uncontrollable free fall. By then the people had become so reliant on public services and government benefits that they had no way to take of themselves on their own. The government controlled the lives of the people and now the government had no way to keep them healthy, fed, and alive.

4. The socialist system encouraged corruption. A socialist government needs an absurd number of government workers to run the day-to-day lives of the people. As a result, government itself becomes the one employer that is always hiring more employees. In socialist Venezuela, the government filled its coffers with oil revenue, generously paying top officials who exercised control over oil profit distribution. Government oligarchs grew rich while the people remained poor. The Washington Examiner explains further:

The bigger the government, the more people’s success depends on sucking up to officials rather than on offering a service to consumers. Expanding state bureaucracies offer new opportunities for nepotism. First, Venezuelan jobs were allocated on the basis of political allegiance; now food supplies are.

5. The government had no way of controlling hyperinflation because the country’s monetary policy was imaginary. The Venezuelan state pretended to have control over the price of the bolivar, the nation’s (now-worthless) currency. The socialist state thought that it could set the price of goods, wages, property, and services and simply print money to make up for deficits. But as it turns out, recklessly printing money doesn’t actually work.

The government does indeed control certain nominal numbers about the economy. They can and do insist that the bolivar is worth this much, that bread must be sold at a certain price, that wages are this or that. And then that reality does that uncomfortable thing again and it turns out that the bolivar is worth what someone will pay for it, no more, meaning that the nominal prices of labour or bread are very different from the real ones.

The inflation is of course being created by the government as they print money to pay their bills. For the Modern Monetary Theory people are entirely correct, government can just print money and spend it on whatever it likes. When they’ve done so hyperinflation like that in Venezuela is usually what results as well. Meaning that there’s nothing wrong with MMT as a theory it’s just that it always fails as a policy.

Worstall concludes that when the government aggressively allocates resources, in any country, including the United States, it’s always bad news.

“Economics is about the allocation of real resources so it’s the real prices that matter,” he notes. “The Chavistas thought it was nominal that mattered, that they could just set prices as they wish. It don’t work that way, something we should recall as our own democratic socialists attempt to fix the prices of rent, wages, college and the rest.”