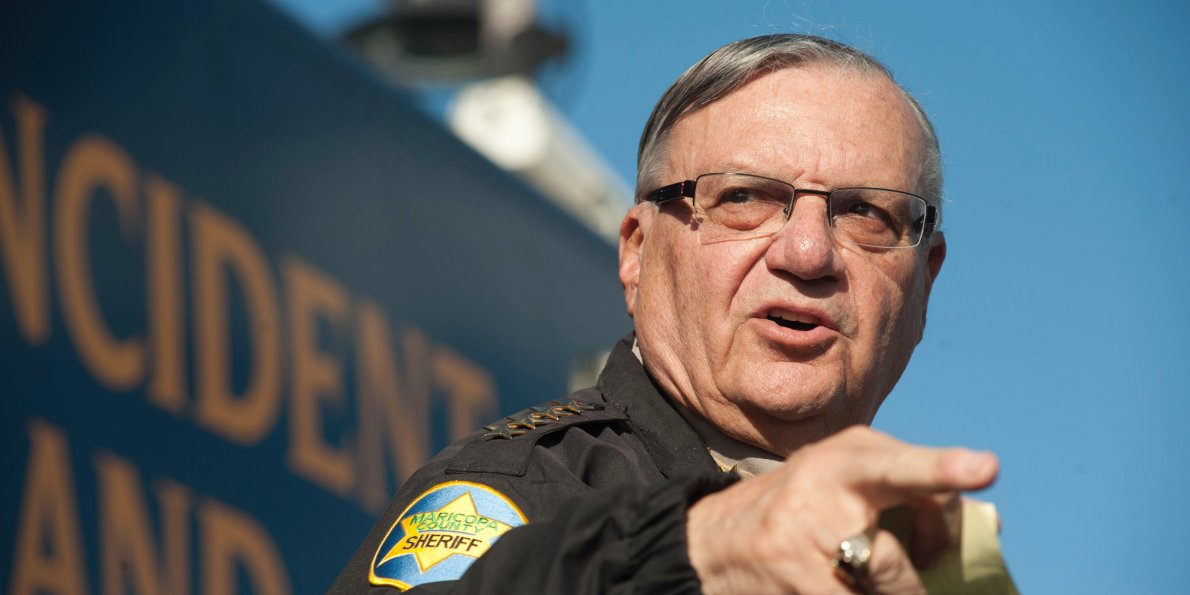 Sheriff Joe Arpaio may be pardoned in the next few days after the former Maricopa County law enforcement boss was found guilty of criminal contempt. The charges stem from “defying a state judge’s order to stop traffic patrols targeting suspected undocumented immigrants.”

Sheriff Joe Arpaio may be pardoned in the next few days after the former Maricopa County law enforcement boss was found guilty of criminal contempt. The charges stem from “defying a state judge’s order to stop traffic patrols targeting suspected undocumented immigrants.”

President Trump may soon issue a pardon for Joe Arpaio, the colorful former Arizona sheriff who was found guilty two weeks ago of criminal contempt for defying a state judge’s order to stop traffic patrols targeting suspected undocumented immigrants. In his final years as Maricopa County sheriff, Arpaio had emerged as a leading opponent of illegal immigration.

“I am seriously considering a pardon for Sheriff Arpaio,” the president said Sunday, during a conversation with Fox News at his club in Bedminster, N.J. “He has done a lot in the fight against illegal immigration. He’s a great American patriot and I hate to see what has happened to him.”

Trump said the pardon could happen in the next few days, should he decide to do so.

Arpaio, 85, was convicted by U.S. District Judge Susan Bolton of misdemeanor contempt of court for willfully disregarding an Arizona judge’s order in 2011 to stop the anti-immigrant traffic patrols. Arpaio had maintained the law enforcement patrols for 17 months thereafter.

Arpaio is 85 years old and now faces up to six months in jail while illegal aliens roam free. Absolutely disgusting.

The charges against Arpaio stem from a civil rights suit demanding he cease “racial profiling” in his Maricopa County Sheriff’s Office’s immigration enforcement operations. After a federal judge issued an order demanding certain practices, Arpaio was charged with contempt for continuing to try to enforce the law as he saw fit.

Because Arpaio was charged only with a misdemeanor punishable by a maximum of six-months in jail, the U.S. Constitution does not guarantee him a right to trial by a jury of his peers. Arpaio and his attorneys repeatedly petitioned for a jury, only to be denied by Judge Bolton in March and again in May. Sources familiar with the proceedings have told Breitbart News the decision to charge only the misdemeanor was likely a ploy by federal prosecutors to avoid a jury trial in the community where Arpaio served as sheriff for more than 20 years

National Center for Police Defense (NCPD) President James Fotis, who was present in the courtroom, was highly skeptical a Phoenix jury could have ever found Arpaio guilty. He told Breitbart News:

“I sat through three days of testimony and it was clear from the beginning that the DOJ had no evidence to make their case.  In fact, all of the DOJ’s witnesses made it clear that Judge Snow’s order was unclear and ambiguous. There is no way a jury would have determined that the Sheriff willfully and intentionally violated the judge’s order.”

The DOJ was run by none other than the LIAR Loretta Lynch when they decided to go after Arpaio with criminal charges. This is just more fallout from an 8 year crime spree during the Obama administration.

Sheriff Arpaio and his legal team will be filing an appeal to fight his conviction.

The Left either wants us dead or in jail. They will not stop attacking the Trump administration or conservatives until they get blood.