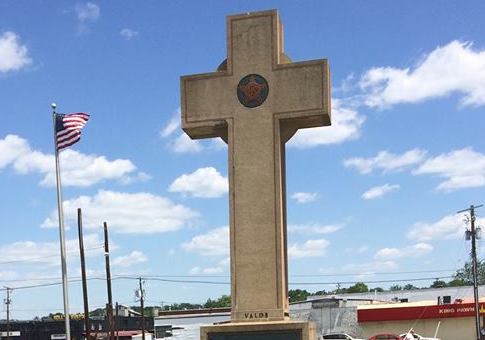 A federal appeals court ruled on Wednesday that a nearly century-old, 40-foot cross honoring World War I veterans is an unconstitutional endorsement of religion.

In a 2-1 decision, a panel of the Fourth U.S. Circuit Court of Appeals in Richmond, Va., found the cross in Bladensburg, Md. “breaches” the wall in separation of church and state, the Wall Street Journal reported.

The American Humanist Association sued the Maryland-National Capital Park and Planning Commission, the agency that owns the title to the property, in 2014. The association argued the cross violates the First Amendment’s Establishment Clause, which bars the government from making any law “respecting an establishment of religion.”

The concrete Celtic cross, locally referred to as the “Peace Cross,” was erected in 1925 by the American Legion and stands on a pedestal on a highway medium about a half-hour drive from Washington, D.C. It honors 49 men from Prince George’s County who died in World War I.

Judge Stephanie D. Thacker analyzed a question the Constitution asks about what a “reasonable objective observer” would think when passing the memorial. Thacker wrote the majority opinion for the three-person judge panel and concluded an observer of the cross would perceive it as an endorsement of the Christian faith.

Thacker also noted the size of the memorial and the fact that the park commission had spent or earmarked $200,000 to maintain and preserve the site, thus entangling the government in an unconstitutional endorsement of religion.

Hiram Sasser, a co-defendant in the litigation and lawyer with the First Liberty Institute, said the defendants are considering their appeal options and may take it to the Supreme Court to review the decision.

“It would be shameful for our nation to tear down a veterans memorial almost a hundred years after it was put up,” Sasser said.

The Ninth Circuit Court of Appeals in California heard a similar case in 2011 and ruled against the 29-foot cross at the Mount Soledad Veterans Memorial in San Diego. The case was resolved when Congress authorized the sale of the memorial’s property to a private entity.