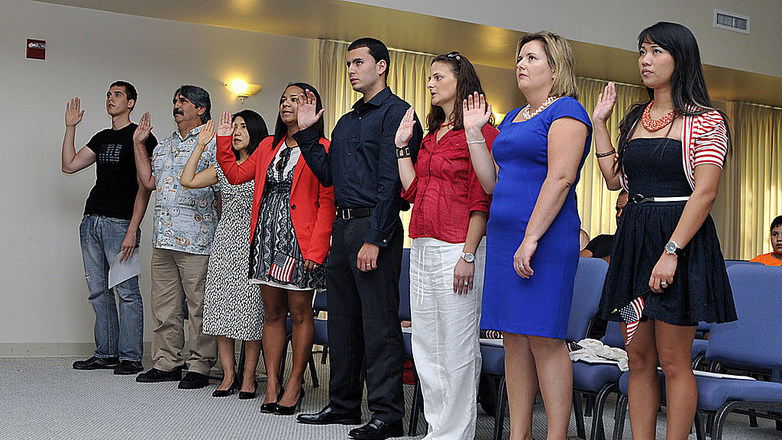 What you are about to read will make you dumber. For that we apologize.

Olga Paule Perrier-Bilbo is a French citizen who has lived in Scituate, Mass., since 2000. She says she has twice applied for U.S. citizenship and now she’s ready to become an American.

There’s just one problem. She doesn’t want to say the last four words of the citizenship oath. As an atheist, she objects to “So help me God,” claiming that the phrase violates her right to religious freedom.

So she filed a lawsuit.

“By its very nature, an oath that concludes “so help me God” is asserting that God exists,” says the lawsuit, filed in federal court on Thursday. “Accordingly, the current oath violates the first ten words of the Bill of Rights, and to participate in a ceremony which violates that key portion of the United States Constitution is not supporting or defending the Constitution as the oath demands.”

Here’s where the story veers into stupid.

In 2009, Perrier-Bilbo was offered the chance to recite a modified oath, one which did not include “so help me God.” Say the oath, become an American.

But she doesn’t want that. She says that reciting the modified oath would make her “feel less than a full new citizen.”

“This is unfair, demeaning and improper,” the lawsuit says. “Plaintiff is unwilling to start her new life as an American citizen in some second-class status solely because she chooses to follow her religious precepts. Under the principles of equal protection, she demands the right to experience the elation, the pride, the sense of camaraderie, and the sense of belonging, which comes from joining her fellow new citizens as an equal participant in the naturalization oath ceremony.”

This issue has come up repeatedly in U.S. history. The First Amendment says Congress “shall make no law respecting an establishment of religion, or prohibiting the free exercise thereof,” and dozens of cases have risen to the Supreme Court.

And saying the oath that doesn’t include that phrase — a viable option for anyone who does not want to say “So help me God” — would make her less of an American.

Sorry, but you are now dumber.