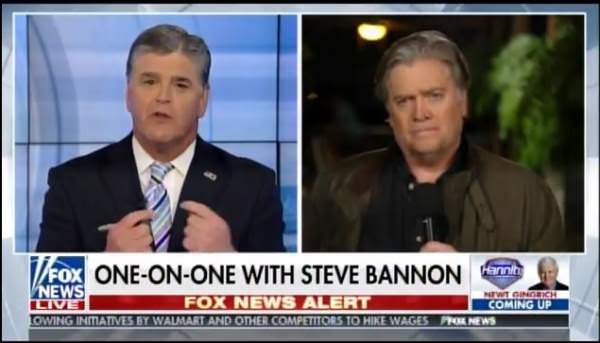 Steve Bannon went on with Sean Hannity in his first live interview since leaving the White House.

Steve Bannon: The same gang that is going after Roy Moore went after Donald Trump…

This is a referendum on the party of Davos and the elites in Davos and the United States and Washington DC that Mitch McConnell is the face of. Tomorrow the good folks of Alabama are going to decide. Does sovereignty rest with the people or does it rest with money. Is it going to be the muscle of the grassroots or the money of the corrupt and incompetent permanent political class that rules Washington DC like a new aristocracy…

The elites represented by Mitch McConnell hold me in contempt. They think I’m a bad guy, they think I’m a dangerous guy. I wear their contempt as a badge of honor. They have helped destroy this country. They have done nothing but allow economic hate crimes against the working men and women in the heartland of this country. The factories went to China and the drugs came in. We gotta stop it.

It’s good to see Steve Bannon still has that fire in his belly!

On Tuesday it will be the establishment elites led by Mitch McConnell versus the common man led by Steve Bannon and fellow conservatives.