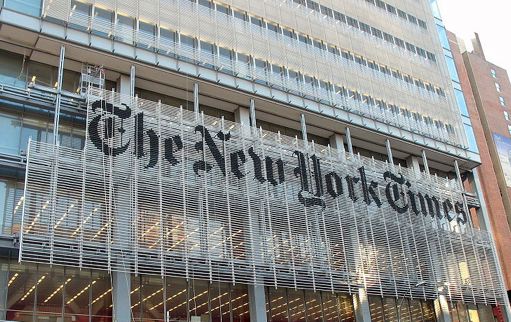 In a stupefying turn of events, The New York Times ran a lengthy, 1,300 word article about a New Jersey senator who is facing a federal bribery trial, yet forgot to mention one small word among the 1,300 it doled out: Democrat.

Writing about the impending trial of Senator Robert Menendez, the Times managed to leave out that tiny detail, which was noticed on Twitter:

The New York Times wrote a 1,288 word article that never once informs the reader that the Senator facing a bribery trial is a Democrat. https://t.co/qJ742kB4en

Caught with its pants down, the Times decided to finally report that small bit of information:

The New York Times has quietly added that Menendez is a Democrat to their article… in the fourth paragraph. You can see the change here: pic.twitter.com/pAaPsgbFjf

For those yelling at me that the NYT always said Menendez was a Democrat, here's the detail of the quiet change made tonight. https://t.co/dKlE3WvHDX

So what did Menendez allegedly do to justify being charged with 12 corruption-related counts, including six counts of bribery and three counts of honest services fraud? According to the Times:

Dr. Salomon Melgen, a wealthy Florida ophthalmologist, bestowed on the senator lavish gifts of private flights, luxury accommodations and free vacations – all which Mr. Menendez initially failed to disclose — and he made more than $700,000 in direct and indirect political contributions to Mr. Menendez.

… prosecutors alleged that Mr. Menendez began taking bribes from Dr. Melgen shortly after Mr. Menendez was elected to the Senate in 2006 and that a lot of his efforts on behalf of Mr. Melgen came after large donations to his re-election efforts and legal defense funds.

When Dr. Melgen needed help to resolve a contract dispute for a company he owned operating X-ray equipment in the Dominican Republic, he donated $60,000 to various political groups and super PACs supporting Mr. Menendez, the brief stated. On the same day, Mr. Menendez met with an assistant secretary on the state to press the issue, according to the brief. When Dr. Melgen needed quick changes to a Medicare reimbursement program, he donated $300,000 through his company to Majority PAC, a super PAC supporting Democratic candidates for Senate. The same day, Mr. Menendez met with officials at Centers for Medicare and Medicaid Services, and a month later, with Kathleen Sebelius, then the secretary of Health and Human Services, according to the brief.

The Times wrote that the Supreme Court’s review of the trial of former Virginia Governor Bob McDonnell, who had been convicted on corruption charges, may help Menendez’s attorneys, as SCOTUS decided that McDonnell’s arranging for meetings between donors and others was not illegal.

The Times article did a pretty good job offering the details of the case.

They just left one little detail out.