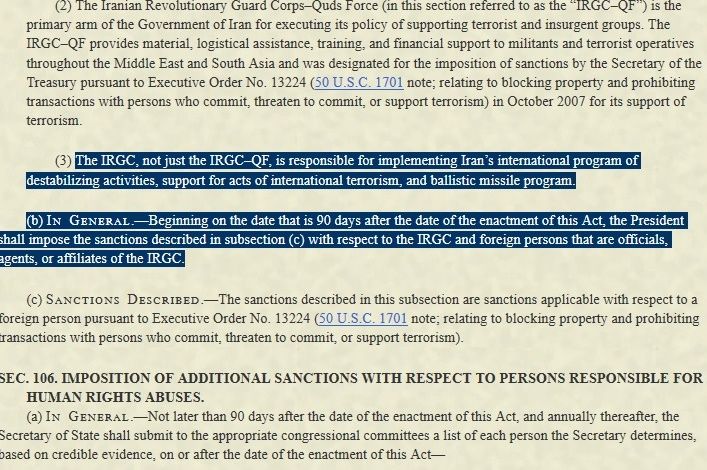 (CNSNews.com) – While most attention has been focused on the Russia elements of the bipartisan sanctions bill signed by President Trump on Wednesday, the legislation also – for the first time – targets Iran’s Islamic Revolutionary Guard Corps (IRGC) for its support for terrorism.

In recent weeks Iranian officials have warned that naming the IRGC a terror-sponsoring group could lead to violence, with armed forces chief Maj. Gen. Mohammad Hossein Baqeri saying the move “would be a big risk to the U.S. and its bases and forces stationed in the region.”

For years congressional critics of the Iranian regime have sought to have the IRGC punished for sponsoring terrorism, either by being listed as a “foreign terrorist organization” (FTO) or via designation under a post-9/11 tool designed to disrupt funding to terrorists, Executive Order 13224.

In 2007, President George W. Bush designated the IRGC’s external arm, the Qods Force (IRGC–QF), under E.O. 13224 for providing support to terrorists in Lebanon, the Palestinian self-rule territories and Afghanistan.

But he and his successors stopped short of designating the IRGC itself, balking at effectively declaring the armed forces of a sovereign country to be a terrorist-sponsoring entity.

Action has been taken against the IRGC for other activities and under different executive orders – including, most recently, designation by Trump last month under E.O. 13382, which deals with support for weapons of mass destruction proliferation; and under E.O. 13581, which targets transnational criminal organizations.

Iran experts in the U.S. have long argued that the Qods Force and broader IRGC are inseparable, and that there is little point in accusing one of terror-sponsorship but not the other.

The Countering America’s Adversaries Through Sanctions Act signed Wednesday – which imposes sanctions on Iran as well as on Russia and North Korea – makes the same point.

“The IRGC, not just the IRGC–QF, is responsible for implementing Iran’s international program of destabilizing activities, support for acts of international terrorism, and ballistic missile program,” it states.

The legislation instructs the president within 90 days to impose sanctions, under E.O. 13224, against “the IRGC and foreign persons that are officials, agents, or affiliates of the IRGC.”

The National Iranian American Council (NIAC), which advocates engagement with Tehran and is a strong supporter of the Iran nuclear deal, has led criticism of the approach taken by the administration and Republicans in Congress.

NIAC’s sister organization NIAC Action said Wednesday the Iran sanctions in the bill were “dangerous and controversial” and “will likely backfire against us.”

“These Iran sanctions are a threat to the nuclear agreement and give Donald Trump new tools to significantly escalate tensions in the Middle East,” said executive director Jamal Abdi.

“[White House chief strategist] Steve Bannon and other administration hardliners have been tasked with formulating Trump’s reckless new strategy towards Iran and Congress just gave them new tools to do so,” he said.

“The alarm bells should be ringing but instead of restraining Trump’s reckless inclinations on Iran, Congress appears to be actively encouraging him.”

Strong support for the sanctions came from the exiled Iranian opposition group National Council of Resistance of Iran (NCRI), which advocates regime change in Tehran.

The NCRI called for the legislation “to be implemented immediately, meticulously and without exception and urges the European Union to join these sanctions.”

(Some European countries involved in energy deals with Russia are firmly opposed to the bill, and the E.U. is worried about Trump’s negative view of the nuclear deal.)

Beyond sanctioning the IRGC, the NCRI said its expulsion from the Middle East, especially from Syria and Iraq, was “a prerequisite to ending the conflict and crisis that have engulfed the entire region.”

“The terrorist designation and sanctions against the IRGC should have taken place a long time ago since the IRGC protects the entirety of the clerical regime,” it said.

“It also acts as the regime’s main instrument of suppression and export of terrorism and extremism. However, the policy of appeasing the mullahs’ religious dictatorship paved the way for rampage in the entire region by the IRGC and its proxies.”

The IRGC is deeply involved in the Syrian civil war, fighting alongside its Lebanese Hezbollah terrorist proxy to keep President Bashar al-Assad in power.

During the Iraq war, U.S. military commanders blamed the IRGC–QF and affiliated Shi’ite militias for the deaths of some 500 U.S. military personnel.