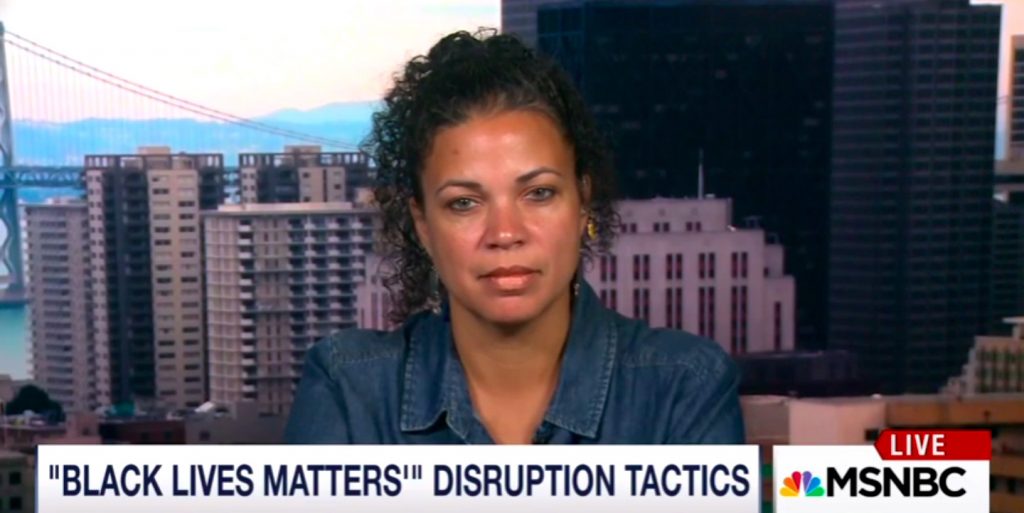 She claims “white capitalism” is an American institution that is inherently racist; therefore black people should pursue more collectivist approaches to economic empowerment.

We’re dreaming of a #BlackXmas…where folks withhold dollars from White capitalism and use resources to #BuildBlackCommunity. Instead of spending, DONATE to a Black organization as a holiday gift for your loved ones or #BuyBlack. Go to https://t.co/klHABpJaeu for more.

“We say ‘white capitalism’ because it’s important that we understand that the economic system and the racial structures are connected,” said Abdullah, a founding member of BLM who leads its Los Angeles chapter (BLM-LA).

“We have to not only disrupt the systems of policing that literally kill our people, but we have to disrupt the white supremacist, capitalistic, patriarchal, heteronormative system that is really the root cause of these police killings.”

Abdullah, who descends from a family of Marxist organizers, made the comments on her weekly KPFK radio show called “Beautiful Struggle,” which features songs like “5 Million Ways to Kill a CEO” as bumper music. She was joined by Dr. Anthony Ratcliff, also a professor at CSU-LA, who organized BLM’s first youth activist camp last summer.

“Black Lives Matter and other organizations build a strong critique and understanding of racism and white supremacy and sexism and homophobia, transphobia, but we have to have as much hatred or vitriol against capitalism,” Ratcliff said. “Until we start to see capitalism just as nefarious as white supremacy, we will always be struggling.”

BLM launched a Black Xmas website on Saturday which calls for “no spending with White corporations” through New Year’s Day, encouraging supporters to donate to allied, black-led community groups or black-owned businesses instead.

We also stand in solidarity with @BLMLA and #BlackXmas. Because capitalism is #AntiBlack. If you must shop, please try to support Black businesses or at least small POC immigrant businesses. LA is full of street vendors and swap meets. Its not so hard!

The website goes on to state: “Donald Trump embodies White capitalism. If you are anti-Trump, you should hold back your resources from him and the like.”

“We are socialized to believe that the answer to white oppression is black capitalism,” said Abdullah.

In Los Angeles, BLM activists are organizing around historical, communal economic models that were implemented by free black people during the era of slavery. On the radio show, Ratcliff and Abdullah spoke of building black mutual aid societies and black co-ops as alternatives to the existing capitalist structure that requires dismantling.

“In order to get free as a collective, we have to think collectively,” said Abdullah. “It’s not enough for one person to draw profit because that also drains community. It needs to be structured around this idea of collective uplift.”

BLM has promoted Black Xmas every year since its founding. However, many people remain unaware of its anti-capitalist motivations.

As Dr. Abdullah wrote in the Los Angeles Sentinel:

This call is fundamentally tied to Black Lives Matter’s mission to end state-sanctioned violence against Black people. We know that state-sanctioned violence is rooted in White-supremacist capitalism. Since its inception in 2013, Black Lives Matter has recognized the killing of Black people at the hands of the police as not simply a question of a few rogue officers, but a part of a system that is built on the backs of Black people. …we live under a system of White-supremacist capitalism that exploits Black people as workers and consumers and relies on the police state to secure and maintain its dominance.”