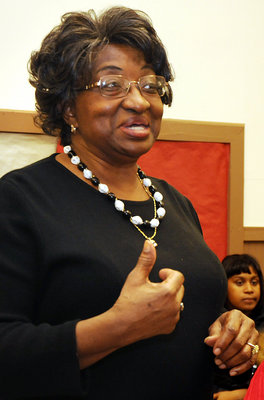 This is one seriously bonkers story and I don’t know how to describe it any better than the headline. In a stunning piece of liberal logic, a black woman says that since slaves and slave masters got along well enough to not shoot each other we should enact a series of unconstitutional restrictions on gun ownership. I feel like if a white person had said this there would be a problem, but since it was presented by a black woman all of that flawed logic, false equivalency, and racism will go by unchecked by the easily-outraged left.

Willie Mae Samuel is the director of the African American Connection for the Performing Arts in Rome, GA. On Sunday she wrote a guest column for The Rome News-Tribune on the subject of gun control. It turns out she is in favor of disarming Americans and like any true gun-hater she doesn’t quite have her facts straight. Here are some of the insane highlights:

Former President Obama and all of the people who are calling for gun reform are labeled as people who are against the 2nd Amendment. The President simply stated that for normal living in a civilized society there is no need, that he could come up with, which would require an individual to have to walk, run or drive with an automatic assault rifle.

I must have missed that Obama speech, much in the same way I was unaware of these “super weapons” that threaten us all:

When the Constitution was written giving Americans the 2nd Amendment, most guns were muskets using gunpowder. There were no guns with the capabilities of shooting bullets that could explode on impact or once it entered the body, nor did we have guns capable of shooting hundreds of rounds at one time.

A hundred rounds at one time? Even those “automatic assault rifles” Obama was allegedly talking about only fire one round at a time. Presumably to fire 100 rounds simultaneously, a weapon would need 100 barrels, which would make it kind of clunky and difficult to weild. I did actually find this experimental gun called Metal Storm, which has 36 barrels and can supposedly fire one million rounds a minute. It however still appears it fire only one round at a time.

I would like to counter Miss Samuel by pointing at that when the Constitution as written profound liberal ignorance didn’t exist either and yet no one is calling for a repeal of the 1st Amendment.

That was some dumb stuff, but nothing compared to this:

We here in America said that we built this country on Godly principles. For the last 40 years we seem to not trust the God whom we call on to bless America, but we have put our trust in guns. We have the G’s all twisted. Many of us are saying guns bless America. We attend church every Sunday trusting in our all-powerful God who created the universe and set everything in motion. He gave man dominion over all creatures large or small. Now we have decided that guns are the answer to all of our disjointedness. Guns are the answer to all of the hate and confusion and race baiting, low moral standard and lack of integrity. Even during slavery days, the master and the slaves were able to coexist without waking up every morning desiring to kill each other. It did not mean that the slaves loved the condition in which they lived. It meant that the slaves believed in the God that they were praying to daily. The God who finally brought civility and reason to the hearts of leaders and other noble minded individuals. (my emphasis)

See, I wasn’t lying. This kook actually thinks that slaves got along swimmingly with their masters and that somehow it means that we should ban guns. She never explains the connection between these things, but why should she? She is a liberal gun-hating nut and they don’t have to explain anything or even come close to making sense. It’s in their charter.