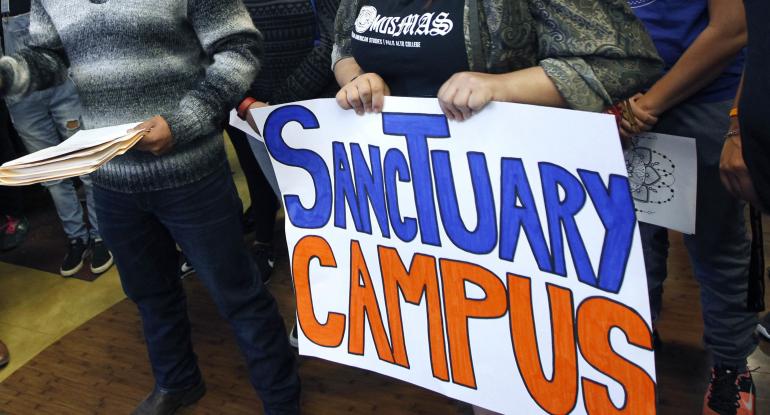 Six months ago, after left-wing students and Antifa thugs rioted at the University of California Berkeley, shutting down an event by then-Breitbart News editor Milo Yiannopoulos, the student newspaper, the Daily Californian, published several op-eds defending the use of violence to stop a speech.

The series, “Violence as self-defense,” was all the more remarkable because of UC Berkeley’s fame as the birthplace of the Free Speech Movement in 1964.

One of the repeated arguments was that Milo’s speech was itself a form of violence. As one student put it: “The violence that forms the foundation of Yiannopoulos’ ideology is far worse than any tactic the black bloc uses.”

In that twisted view, the radical students and masked militants who trashed UC Berkeley were protecting themselves and others, not just from the violence Milo might inspire, but from the “violence” somehow inherent in his ideas.

Fast-forward six months, and the same “speech is violence” arguments are being made in the wake of the violence at Charlottesville — not just by Antifa, but by widely respected members of the media and political establishment.

Sen. Marco Rubio (R-FL) said that the white supremacists in Charlottesville, who had initially demonstrated non-violently, were “100% to blame” because their evil ideology “justifies & ultimately leads to violence against them.”

Dwell on that for a moment. A United States Senator — and a conservative, no less — who swore to “support and defend the Constitution” argued that violence against people with hateful ideas is justified by the content of those ideas.

The same view was expressed by politicians and pundits across the political spectrum. Virtually no one could be found to defend free speech and the First Amendment — which exists especially to protect unpopular views.

No one, that is, except President Donald Trump himself. By pointing out the well-documented fact that “both sides” participated in the violence in Charlottesville, he highlighted the fundamental principle at stake: free speech is so precious that anyone who uses force to silence another person must automatically be presumed to be in the wrong.

For that, he was ripped apart by the media, abandoned by his business councils, and trashed by fellow Republicans.

The attacks from journalists were particularly rich. They shriek about threats to the First Amendment every time a briefing is held off camera. When it counted, the press showed no more concern for freedom of speech than Antifa did.

CNN’s Jim Acosta even questioned Trump’s loyalty to the country: “I think we saw the President’s true colors today. I’m not sure they were red, white, and blue.” That is Trump’s reward for being loyal to his own oath of office.

Forty years ago, in a case every law student studies or at least hears about, the U.S. Supreme Court upheld the First Amendment rights of the National Socialist Party of America, even though the Nazis specifically chose to march in Skokie, Illinois, a heavily Jewish community with a large population of Holocaust survivors.

Many of our political leaders have law degrees, yet not one bothered to cite the legal precedent from Skokie — or any other relevant case.

Unfortunately, there was practically only one man defending free speech this week. As for the rest of the country, the campus snowflakes have clearly taken over.

The clearest sign is the rush to remove monuments — not just statues and plaques honoring Confederate history, but also anything the mob decides it must erase. In one Atlanta park, enraged leftists attempted to destroy a monument to peace. This, too, comes from campus. This week, Yale covered up an historic carving depicting a fight between a Puritan and a Native American, the better to represent “diversity.”

George Orwell once wrote: “Totalitarianism demands, in fact, the continuous alteration of the past, and in the long run probably demands a disbelief in the very existence of objective truth. The “woke” activists who bought 1984 after Trump’s election do not seem to realize that the novel is a cautionary tale, not a manual.

As Trump asked this week: “Where does it stop?” It does not stop until our leaders stand up for reason and for liberty. Right now, flawed though he may be, Trump is the only one.