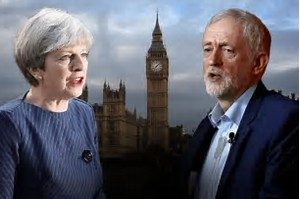 Angry youth was always going to be a wildcard in this election, and it might just have helped cause yet another upset in Britain.
The political upheaval since the country voted to leave the European Union last year stems from the fault lines across the country that Prime Minister Theresa May misread and Labour leader Jeremy Corbyn appears to have understood.
U.K. Election: Follow our live results map and full coverage

Brexit, along with spending cuts and paying for pensions, pitted the generations against each other. Young once apathetic Britons rallied behind Corbyn’s leftist battle cry and propelled the anti-May anthem “Liar, Liar” to the top of the pop charts with 2.6 million YouTube views.

“I wanted to see Theresa May get a bit of a kicking,” said George Hames, 20, who voted for Labour in London. “The way Corbyn has been able to paint a contrast between himself and May: He’s given people something to vote for, not just pragmatically, but because they think it can change the world.”

Following last year’s referendum, there were protests in some cities with banners such as “You Stole My Future.” Thursday’s vote was the action that spoke louder than words as Corbyn wooed students with promises like restoring free university education and scrapping austerity, prompting a surge in the number of younger people registering to vote.

Corbyn, who now backs Brexit, has nurtured a cult-like following by taking his party back to its socialist roots and — so people thought — away from any chance of power. He promised what he called politics for the people and had a buoyant campaign that surprised allies and foes alike. May, meanwhile, floundered.
“Everyone who supported the Labour Party yesterday — young people, old people, everyone in between — I think they should be very proud of what we achieved,” Corbyn said on Friday.

Thousands lined the streets outside Corbyn’s final rally at the Union Chapel in North London, with supporters inside the building dancing as they waited for their 68-year-old gray bearded leader. The party atmosphere was a stark contrast to May’s final speech — a short address in the basement of a conference center in Meriden, central England.

To loud cheers and foot-stamping from his supporters, Corbyn defined his vision for Labour, driven by “hope that we can stand up to the elite and to the cynics.”

Amy Grant, a 28-year-old actress and Labour supporter, said she had never attended political rallies before Corbyn. “He’s the only politician who speaks for my generation,” she said. “He’s the only one who doesn’t perform — he says what he thinks.”

In a telling reaction, more U.K. millennials tried to register to vote ahead of the general election than before the Brexit referendum. About 2 million people 34 or under attempted to sign up in the five weeks before the May 22 registration deadline, up 20 percent on the comparable period before the EU vote, U.K. government data showed.

“There’s a huge gulf now between young and old,” Nick Clegg, the former Liberal Democrat leader who famously did a U-turn on a campaign pledge not to raise tuition fees for college students, said as he lost his seat to a Labour in the city of Sheffield. “We must try and reach out to each other to find common ground and heal the wounds.”

For Adam Bernstein, 25, it was about feeling aggrieved from having his country taken out of the EU. He wanted to remain in the EU, and voted for Labour in London.

“For me it’s a sign that Brexit can be stymied and kicked into the long grass,” said Bernstein. “Obviously Labour hasn’t won the election, but it could have been an awful lot worse.”

In Wales, Craig McDonald, also 25, a charity worker who voted Labour, said he couldn’t believe what he was seeing. “My friends were physically cheering in the streets,” he said. “I was loving it.”

Abbie Douglas, 18, voted for the first time in a general election in the Scottish city of Stirling. She also backed Labour, though the Conservatives took the seat from the Scottish National Party.

Former SNP leader Alex Salmond, who also lost in the northeast of the country, put his party’s losses nationwide down to a late surge in Labour popularity because of Corbyn’s campaign. In Scotland’s 2014 independence referendum, it was Salmond’s party that made politics cool again. For Douglas, a vote for Labour was about sending a message to power in London.

“They have better policies than the Conservatives on health, inequalities, pensions,” said Douglas. “Also, Theresa May is so unlikable.”