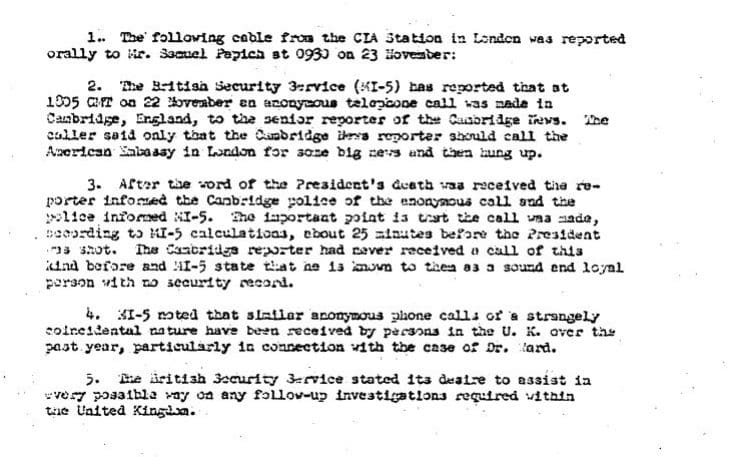 A British newspaper received a mystery call minutes before the assassination of John F Kennedy.This is one of the most astonishing revelations from the JFK files, released on Thursday.The revelation was made in papers relating to the killing, which happened on November 22 1963.

A memo to the director of FBI revealed that a call was made to the senior reporter at the Cambridge News at 6.05pm on the day Kennedy was shot in Dallas, Texas.

The document, from deputy director James Angleton, said: “The British Security Service (MI-5) has reported that at 1805GMT on 22 November an anonymous telephone call was made in Cambridge, England, to the senior reporter of the Cambridge News.

“The caller said only that the Cambridge News reporter should call the American Embassy in London for some big news and then hung up.”

Scenes in the @CambridgeNewsUK newsroom this morning. We'll get to the bottom of this #jfkdocuments pic.twitter.com/sWx5RNQdNZ

More strange revelations came from the memo, including that just 25 minutes after the call ended, the President was shot.

It continued: “After the word of the President’s death was received the reporter informed the Cambridge police of the anonymous call and the police informed MI-5.

“The important point is that the call was made, according to MI-5 calculations, about 25 minutes before the President was shot.

“The Cambridge reporter had never received a call of this kind before and MI-5 state that he is known to them as a sound and loyal person with no security record.”

A copy of the memo, dated November 26 1963, was released by the National Archives in July this year, but had gone unreported until the latest batch of documents pertaining to the Kennedy assassination were released on Thursday evening.

It is thought the tip-off could have possibly come from a friend of Lee Harvey Oswald in Grimsby after claims the call was made by a British-born Soviet agent called Albert Osborne.

Archivist and Cambridge historian Mike Petty told Sun Online: “It remains something of a mystery. There appear to be a number of reporters who worked on the paper at the time who in 1981 had no recollection of the call.

“The stories didn’t have bylines in those days either so it’s not easy to find out now who wrote the story of Kennedy’s assassination at the time.”

Solicitor Michael Eddowes found the document about the tip-off in 1979 and it was published by the Cambridge News in 1981.

He thought at the time the spy didn’t ring his local paper, the Grimsby Telegraph, lest he was traced.

Speaking in 1981, Mr Eddowes said the Soviet Union wanted the assassination to look like a conspiracy.

He said: “They left every single lead … and this call was their final effort.”

However, his claims were rubbished at the time by newspaper staff, and they said no mention of the tip-off was ever written in their papers in 1963.

Former editor Keith Whetstone, who was working at the paper at the time of the shooting, said in 1981: “It sounds like a completely fictitious story.”

He said none of the other reporters he worked with remembered the tip-off.