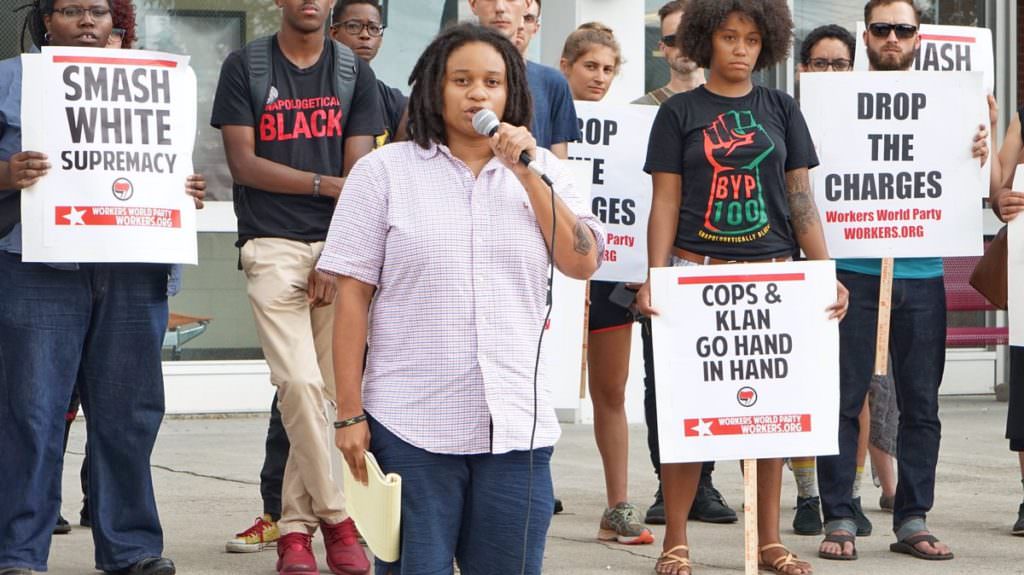 A North Carolina Central University student was arrested Tuesday in connection with a Monday night protest in which a Confederate statue in front of Durham County’s former courthouse was pulled down.

Takiya Thompson used a ladder to scale the podium on which the Confederate Soldiers Monument stood, then climbed the statue and wrapped a strap around it so other protesters could pull it down.

Durham County Sheriff Mike Andrews said Tuesday that his deputies were working to identify others involved in the incident and plan to pursue felony charges against them.

“Let me be clear, no one is getting away with what happened. We will find the people responsible,” Andrews said during an afternoon news conference. “We can all agree yesterday went too far. Yesterday was not the Durham that I know.”

Some protest organizers defended their actions Tuesday, calling the monument a symbol of oppression and racism.

“I’m tired of white supremacy keeping its foot on my neck and the necks of people who look like me,” Thompson said at a separate news conference. “That statue glorifies the conditions that oppressed people live in, and it had to go.”

Woman who climbed a Confederate monument in Durham and helped bring it down stands by her actions. Tonight on #WRAL. pic.twitter.com/EMBt1zPPTm

Woman who climbed a Confederate monument in Durham and helped bring it down stands by her actions. Tonight on #WRAL. pic.twitter.com/EMBt1zPPTm

The Gateway Pundit previously reported, protesters ripped down a monument of a Confederate soldier Monday evening. The monument has stood in Durham County, NC since 1924.

A crowd of protesters gathered outside the old Durham County courthouse on Main Street Monday evening in opposition to a Confederate monument in front of the government building.

Around 7:10 p.m. a woman climbed the statue using a ladder and attached a rope around the statue.

Moments later, The crowd pulled on the rope and the statue fell.

In 1924, the Confederate statue was dedicated to Durham.

Engraved on the front of the monument is “The Confederate States of America.”

Above it, is a statue representing a soldier who fought in the civil war.

“It needs to be removed,” Loan Tran, an organizer, said earlier Monday. “These Confederate statues in Durham, in North Carolina, all across the country.”

There are similar monuments in several cities around North Carolina.