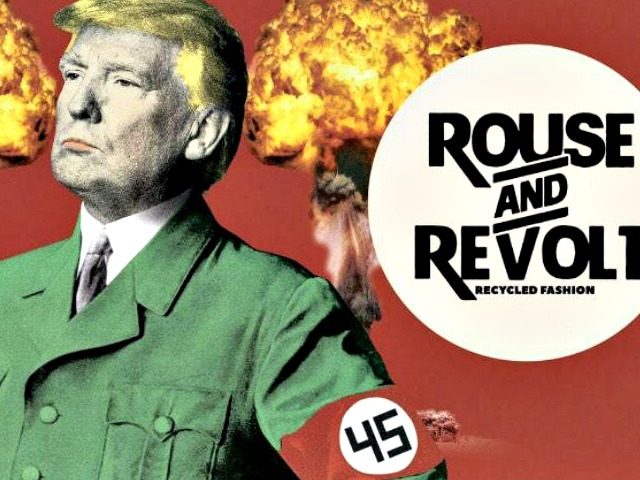 The owner of a tiny fashion store in the small, conservative California town of Chico put up a billboard on Wednesday afternoon portraying President Donald Trump as Hitler — and you can imagine what happened next.

Rouse & Revolt owner Nicholle [Haber] told Newsweek that she didn’t sleep much last night. Her phone wouldn’t stop going off with the persistent buzzing of death threats for her sign, which stylizes the number 45 into a swastika and features Trump posed in a Hitler-esque stance.

“I’m living in a small, podunk red town and I’m already getting death threats,” said [Haber], whose store is in right-leaning Chico, population 90,000. “My business has completely floundered. Overnight I had more one-star reviews than all the reviews I’ve received in a year.”

The sign was up for less than 24 hours before Stott Outdoor Advertising took it down amid a backlash that featured online attacks.

“WOW you have some cute clothing,” someone posted on the store’s Facebook page. “I never heard of your business until you put up your poster board. I would never support your business because clearly you are a divider and a hater.”

[Haber] said one man told her that if she didn’t hang herself, he would do it for her.

But Haber said she’s not only standing behind her beliefs, she’s using the platform of her business to promote her political beliefs.  “He is not presidential, he is not a president,” [Haber] told Newsweek. “He is a celebrity who was born into money. And he’s a Nazi sympathizer. I am going to stand behind my beliefs regardless.”

San Francisco Chronicle reports that Jim Moravec—the general manager of Stott Advertising—claims the billboard was removed because he received complaints from people who were confused by the message:

“The speaker wasn’t clearly identified,” Moravec explains. “There’s not sufficient name recognition. It wan’t clear that this was a business name and not a command or instruction. That combined with the depiction of violence led us to take it down.

Haber is talking with an attorney as she says, “Nowhere in my contract did it say they have the right to refuse. The fact that they put it up and then took it down is ridiculous. Like, ‘Oops, we didn’t notice that was Trump Hitler.’”

Even though the billboard has had the opposite effect on her business, dampening business to all-time lows, Haber said she has been getting some support for her political beliefs—and that’s worth something to this unabashed, liberal crusader.