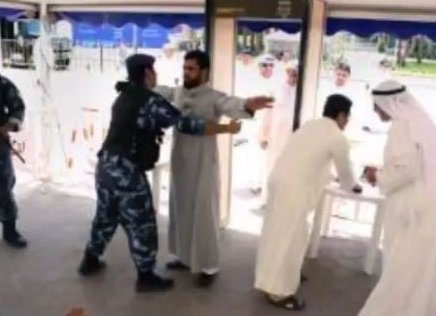 The Council on American-Islamic Relations (CAIR) organized nationwide rallies against Israel this past weekend.

Video: Prayer and Protest for Al-#Aqsa in Front of the Israeli Embassy in D.C. https://t.co/wVHxoKFqAy

In Mecca, Saudi Arabia there are more than 5,000 CCTV cameras and over 100,000 people employed to provide security during the annual Hajj.

Metal detectors are not a problem in Mecca.
But there are no Jews there.

In solidarity with Palestinian factions and terrorist groups, pro-Palestinian Islamist organizations in the United States geared up for more anti-Israel protests on Friday, even though the original cause for their anger has been rescinded.

Last week, Israel removed metal detectors on the Temple Mount, which had been installed near an entrance to Jerusalem’s Al Aqsa Mosque in response to a deadly July 14th terrorist attack there; terrorists managed to smuggle their guns into the mosque on the morning of that attack. Yet Israel’s acquiescence of removing the metal detectors has not silenced its main detractors.

Rallies planned throughout the United States are still being pushed by groups such as American Muslims for Palestine (AMP), the Council on American-Islamic Relations (CAIR) and Jewish Voice for Peace.

In a published set of talking points, AMP claimed that the removal of metal detectors “doesn’t mean that the sanctity of the Noble Sanctuary is guaranteed, nor that Israel will not try other methods in the future to alter the status quo in the Aqsa mosque.”

This message builds on years of false Palestinian claims that Israel is keeping Muslims from praying at the mosque.

The metal detectors were installed only after Palestinian terrorists attacked and killed two police officers.