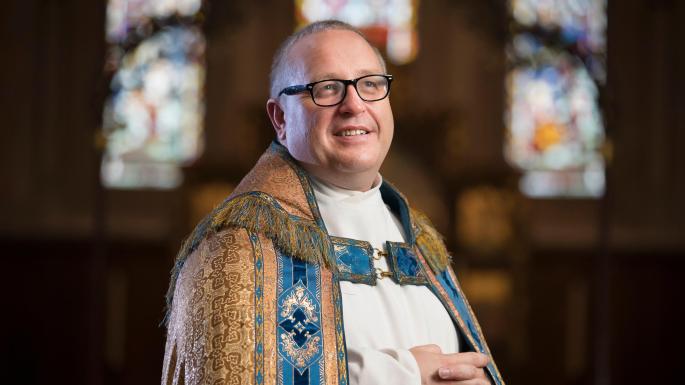 If you needed any more evidence that Christianity has been infiltrated by the idolaters of “social justice” look no further than Church of England’s “Very Reverend” Kelvin Holdsworth.

The rev says Christians should pray that Prince George grows up to have some gender dysphoria or confusion in order to force the Church to accept same-sex marriage.

Christians should pray for Prince George to be gay, says minister https://t.co/QkZOCb807P. Ffs. Mad as a box of frogs.. isn't the Archbishop of Canterbury going to slap him down.

The Very Rev Kelvin Holdsworth, provost of St Mary’s Cathedral in Glasgow, made the comments in a blog he reposted about LGBTQ inclusion in the Church of England following the announcement of Prince Harry and Meghan Markle’s engagement.

In the post, he writes that Christians should pray “for the Lord to bless Prince George with a love, when he grows up, of a fine young gentleman”.

Hey, at least he specifies that it should be when Prince George “grows up.” That’s not always a given in this sort of story.  Holdsworth’s blog is very heavy on the LGBT agenda items and very lean on all that outdated Jesusy kind of stuff.

If people don’t want to engage in campaigning in this way, they do in England have another unique option, which is to pray in the privacy of their hearts (or in public if they dare) for the Lord to bless Prince George with a love, when he grows up, of a fine young gentleman. A royal wedding might sort things out remarkably easily though we might have to wait 25 years for that to happen. Who knows whether that might be sooner than things might work out by other means?

Thankfully, there are at least some in the C of E who aren’t donning their gay apparel in celebration of Holdsworth’s heart’s desire for the young prince.

A former chaplain to the Queen, the Rev Gavin Ashenden, has described the comments as “unkind” and “profoundly un-Christian”, and said the prayer was the “theological equivalent of the curse of the wicked fairy in one of the fairytales”.

Speaking to Christian Today, Ashenden said: “To pray for Prince George to grow up in that way, particularly when part of the expectation he will inherit is to produce a biological heir with a woman he loves, is to pray in a way that would disable and undermine his constitutional and personal role.

“It is an unkind and destabilising prayer. It is the theological equivalent of the curse of the wicked fairy in one of the fairytales. It is un-Christian as well as being anti-constitutional. It is a very long way from being a blessing for Prince George.”

The prayer for Prince George’s homosexuality comes in the wake of the Scottish C of E pushing for support of same sex marriage.