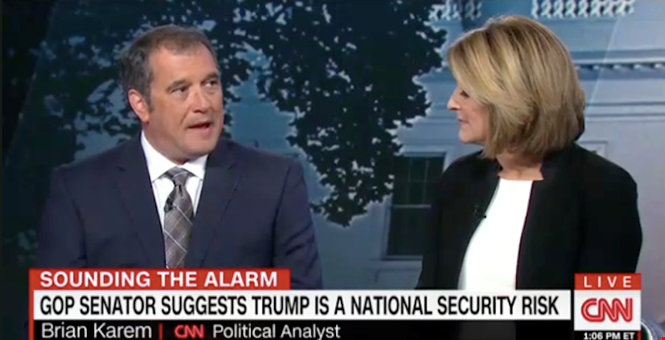 Well, it’s almost become a pastime for members of the liberal media to take swipes at Trump and his base of support. CNN contributor Brian Karem, who is the executive editor for Sentinel Newspapers and White House correspondent for Playboy, hit that out of the ballpark this week by saying what’s left of Trump’s base of support is pretty much made up of Nazis and white supremacists. On Monday, Karem made this observation on CNN, where the panel was discussing the social media war that erupted between President Trump and Republican Sen. Bob Corker (R-TN); Corker said that Trump was leading us to World War Three.

“As his [Trump’s] support has slipped slightly, you’ve seen his rhetoric go farther and farther to the extreme to embrace a base that includes David Duke and white supremacists and the Nazi Party,” said Karem.

Host Wolf Blizter pushed back, saying Trump is not embracing these groups, which Karem agreed.

“No, no—there…that’s the group. He’s not embracing them, but that’s what’s left in that group. There are a lot of people in the group that belong to those particular—,” added Karem. Some crosstalk occurs, where Blizter says that’s just a small group of people. Yet, Karem adds that that may not be the case, though he stops short of saying it, describing the way Trump uses Twitter.

Okay—well, I’m a rather open about my vote for Trump. I don’t think I can be a white supremacist or a Nazi, and that goes for others who voted for Trump as well. There is no widespread Nazi movement in America, neither is there a successful white supremacist movement in the country anymore. These people are clowns, relics of an older world. The Ku Klux Klan has members reportedly in the low thousands, not millions—though the liberal media loves to report as if these groups are a vibrant and healthy political movement. Klan members have certainly voted for Republicans and Democrats in past elections. It doesn’t mean those parties represent their interests. I’m pretty sure Bernie Sanders is not one to support the attempted assassination of congressmen, like his supporter James Hodgkinson did, in June of 2017 that left House Majority Whip Steve Scalise with life-threatening injuries.

Yes, there is an ugly element that has made it known they support Trump for the press, but that’s about it. Everyone else, the overwhelming majority of Trump and Republican voters are patriotic, hard-working folks who want to provide for their families. That’s all. They were forgotten for years—and they found someone who would listen to them. Heck, CNN ventured deep into Trump country and found these voters. Not a scintilla of National Socialism running through their veins. Just because someone isn’t a liberal, a Democrat, a city resident, or a Hillary Clinton supporter doesn’t make them a Nazi.