CNN was caught staging a photoshoot with Muslims, who were holding signs that disapproved of ISIS. They were not the only ones that took the chance to protect Muslims after the latest terror attack, the Associated Press was involved with the photoshoot, as well. The staged photoshoot is an attempt to support Muslims, which is their way of feeding people what they want the public to see.

This is not news and this should be the final straw for the creditability of CNN. They are staging events, instead of covering what is really happening. The evidence against CNN should be enough for viewers to find a new source for their news because this is not covering the truth. CNN constantly is feeding people news that they want people to see and not what is really happening. 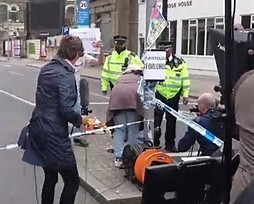 The liberal views CNN is feeding to the public, is part of the reason our country is so misinformed and does not understand what is really happening. Staging a photoshoot to protect Muslims is a slap in the face to the people who have been effected by the recent terror attacks. They are showing that their liberal agenda is more important than standing with those who have been injured or killed in the recent attacks.

It is sad to see that CNN is willing to fake a photoshoot to push their agenda and are ignoring real stories that are happening. It is time to stop thinking of CNN as a reliable news source and expose them for the fake news they have been feeding their viewers. The U.S. is dealing with enough drama created by the liberal news and America needs to wake up and look past the fake news that we are being fed.

I flipped the video, all credit goes to: @markantro pic.twitter.com/QQXwkDOnjS