Republicans need a pick-me-up this week after Tuesday’s shellacking, so I figured I’d mine this gem from CNN’s latest poll — which, I must add, also showed President Trump’s job approval rating tumbling to a new low in the series.  Democrats were high-fiving and slapping each other on the back over these new numbers, laughing about how Trump is all the way down to 36 percent approval in the survey, but guess who’s languishing right there next to him?

Favorable views of the Democratic Party have dropped to their lowest mark in more than a quarter century of polling, according to new numbers from a CNN poll conducted by SSRS. Only 37% of Americans have a favorable opinion of Democrats, down from 44% in March of this year. A majority, 54%, have an unfavorable view, matching their highest mark in polls from CNN and SSRS, CNN/ORC and CNN/USA Today/Gallup stretching back to 1992…The rating includes low favorable ratings from some core Democratic groups, including nonwhites (48%) and people under 35 years old (33%).

Good news for Republicans, right? Eh, not so much. They’re in even worse shape: “But the Republican Party isn’t doing any better, with just 30% of Americans holding a favorable view. That’s essentially the same as September, when the rating hit its lowest point in polling back to 1992, but down from 42% in March. A broad 6 in 10, 61%, have an unfavorable opinion.” But as Allahpundit notes, Republicans are accustomed to dreadfully bad public perceptions, whereas this is uncharted territory for Democrats: “polling below 40 percent is very rare air for Democrats. It’s old hat for Republicans, who’ve been bouncing around between the high 30s and low 40s for more than a decade, but the Dems had never seen the 30s until last November, 10 days after the election, when the party’s dismal performance dropped it to 39 percent overall. Before then it was rare for them to fall below 43-44 percent. Now they’re at 37, down seven points in just eight months.”

Some of that is attributable to the party’s general awfulness and the widespread view that they’re just knee-jerk anti-Trumpers.  But the final detail provided in the excerpt above shows that Democrats are experiencing a phenomenon with which the GOP is intimately familiar: Unpopularity and discontentment among they own voters.  Maybe rigging a primary for an unlikeable loser wasn’t such a great idea. With both parties scraping the bottom of the barrel, CNN’s generic Congressional ballot for 2018 gives Democrats a titanic 12-point lead (50/38): 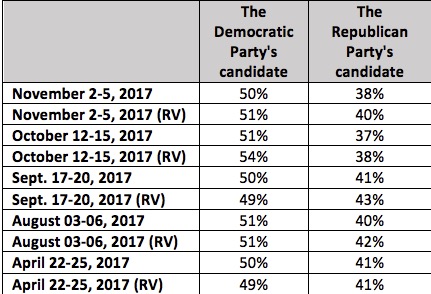 This week’s tea leaves based on actual votes appear to fortify a built-in Democratic advantage on turnout and enthusiasm.  Grain of salt, however: CNN’s polling also gave Democrats a generic ballot lead in October of 2010 and 2014, and we all remember how those cycles turned out.  Oops.  On the other hand, CNN’s Congressional ballot data point isn’t an outlier these days.  The current RCP average is just shy of D+10.  You want an outlier? Try this one on for size, via Politico:

While Democrats claim momentum from a string of wins in Tuesday’s elections, a new poll from Morning Consult and Politico finds voter intent for Congressional Democrats has actually softened…Asked how they would vote if a congressional race was held in their district today, 38% of voters indicated they would vote for Democrats – down 5% from last week. Republican support increased slightly to 39%. That represents the lowest point for Democrats since April. Support for Democrats decreased among Independents by 7 percent over the last week (34% to 27%)

Count me as highly skeptical that Republicans are anywhere near a Congressional ballot lead, especially after the beating they took in Virginia’s suburbs a few days ago. But as I referenced in my election analysis post, even as the fundamentals are all cutting in Democrats’ favor (except for…the economy), question marks remain about their ability to win over the types of voters who will decide races in places that aren’t as hospitable to the modern Democratic Party as Northern Virginia:

The biggest difference between Tuesday’s Democratic wins and the earlier Republican wins is deceptively simple: This time, elections were held on neutral or even Democratic-leaning terrain. For that reason, it is not obvious that Tuesday’s performance represents a significant improvement over the Democrats’ showings earlier in the year. In 2018, they won’t always get the luxury of competing in such favorable districts. To take the House next November, they might have to do even better than they did on Tuesday…Overwhelming Democratic strength in well-educated areas did not cross the political divides of the 2016 election and reach into white working-class areas. In fact, Mr. Northam, a Virginia Military Institute graduate with a strong Southern pedigree, didn’t even come close to matching Gov. Terry McAuliffe, Mr. Obama or Senator Tim Kaine in rural western Virginia. Democratic State Assembly candidates didn’t run well ahead of Mrs. Clinton, either. Yes, the political divisions of the 2016 presidential election wound up working pretty well for Democrats in Virginia, a highly educated state. But that might not be the case for Democrats in a lot of the rest of the country.

Parting thought: If Virginia was a preview of Democratic (and Republican) enthusiasm across the board next year, polling won’t matter much.  Democrats will win, big league.  Then again, a year feels like forever in politics, especially in our news cycle hyper-drive.  Things could improve significantly for Trump and the GOP in the coming months.  But things could also get worse.