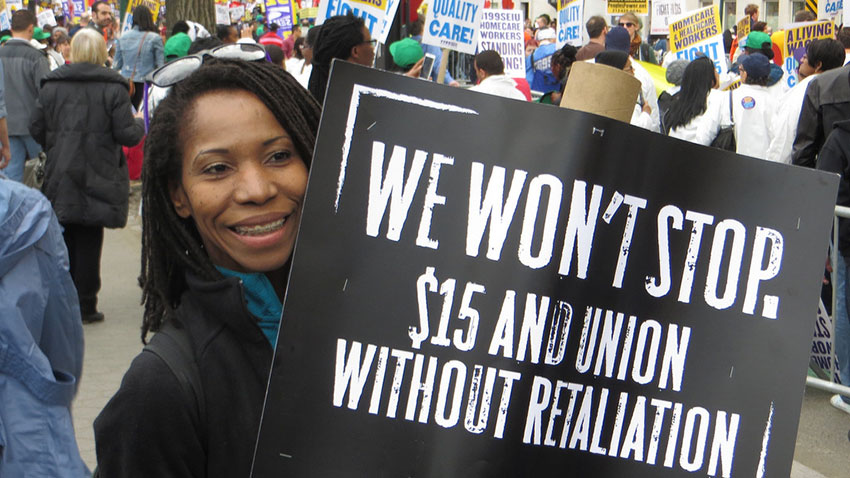 The Fight for $15 minimum wage campaign appears to have collapsed. After tens of millions of dollars were pumped into it by labor unions, specifically the Service Employees International Union (SEIU), the workers that this movement attempted to energize with the promise of higher wages are just not enthused anymore. In fact, what Seattle, which passed a phased-in $15/hour minimum wage law, has shown is that such wage increases led to fewer job opportunities, fewer hours worked, and less money to take home. It reduces wages earned. In New York, the results have been the same, fewer hours worked, less money taken home. Around 1,000 restaurants have closed due to the increased overhead costs of labor. Even USA Today’s editorial board noted that everyone should tread carefully concerning minimum wage hikes thanks to the results we’ve seen out of Seattle.

“If $15 is too much in Seattle, a booming and wealthy city whose region is home to the likes of Amazon and Microsoft, it is too much elsewhere,” they wrote.

Bill McMorris of The Washington Free Beacon has more [emphasis mine]:

The Fight for 15 movement garnered headlines nationwide with demonstrations calling for a $15 minimum wage, but those protests appeared to have petered out in 2017, just four years after its launch, according to a report.

The movement, which has received tens of millions of dollars from the politically influential Service Employees International Union (SEIU), staged protests in just 30 cities in 2017, down from more than 600 in 2016, according to an analysis from the Employment Policies Institute (EPI), a pro-market think tank that opposes minimum wage hikes.

Critics say that the decrease points to the lack of enthusiasm among actual employees at the fast food franchises where protesters amassed, as well as the astroturf nature of the campaign. EPI managing director Michael Saltsman said that the movement is “running out of steam” and contrasted the SEIU’s investment in the movement to that of the United Food and Commercial Workers union (UFCW) decision to spin off its effort to unionize Walmart in 2015.
Well, here’s to the death of Fight for $15, I guess.