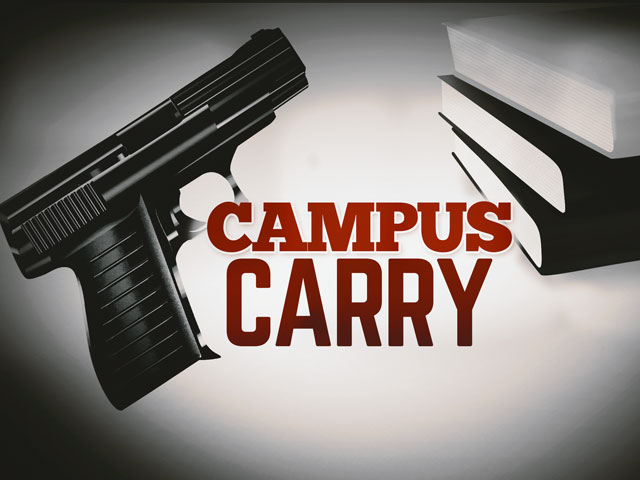 Over the past few years, a rash of horrific shootings on college campuses and other vulnerable locales has once again ginned up the gun control crowd and renewed calls for limiting the ability to legally carry in public spaces. In the case of school and college campuses, many are saying that legal weapons in an educational environment are not only harmful to the culture, they are dangerous.

Trinity University student Caitlin O’Shei recently penned an op-ed recently refuting the idea that it is dangerous to allow college students to legally carry while on their campus. O’Shei contends that there is no reason the legal rights of an American citizen should change simply because that citizen resides in an educational environment. The arguments against college students carrying are often couched in concerns about alcohol consumption rates and the poor decision-making skills of young people.

O’Shei is having none of that.

Opponents of campus carry often reference the higher rates of drinking in college as a reason to disarm students. This argument is flawed on multiple levels. First, from a legal perspective; carrying while under the influence is already illegal. Our system should not deprive people of their rights because they belong to a group of people the government thinks is more likely to commit a crime, especially considering concealed carry permit holders have been proven to be significantly more law abiding than the average citizen. Second, from a pragmatic standpoint, drinking often occurs at parties off campus, which a campus carry ban has no impact on. Third, college students who go through the requirements to obtain a concealed carry permit understand the great responsibility that comes with carrying a gun and will act accordingly. Of the over 150 schools that allow concealed carry on campus, not one has experienced a single resulting act of violence or suicide for the past 20 years by a permittee. Clearly concealed carry does not make campuses less safe.

It is often the argument that just the idea of someone having access to a weapon can make others feel “unsafe”. If students have to walk around wondering whether or not their fellow students are carrying, won’t that change the culture of the campus? Won’t that make everyone uneasy about disagreements or arguments or tension? What if some yahoo gets offended during a heated classroom debate and pulls out his concealed weapon? It feels unsafe to allow legal carrying on campus.

It is not reasonable to restrict a constitutional right to spare others feelings. It is the responsibility of the gun owner to make sure that the gun is safe, not that everyone around them feels safe. The same people willing to restrict student’s rights to carry based off others’ feelings would lose their minds if a university decided Muslim students could not exercise their freedom of religion and pray on campus because it made others feel unsafe. As a society we have largely decided that rights are not subject to the whims of majority emotion, why should the second amendment be any different?

On a personal note, as the mother of two school-age students, I do feel concerned about mass-shooter events in today’s climate. I understand we can’t control the mental health of every single person in America, but we can make sure our children aren’t sitting ducks in closed environments. I would feel much, much safer knowing a teacher or staff member certified in firearms safety and appropriately armed were at least in the vicinity of my child during the school day. As O’Shei points out, legal permit holders aren’t a danger. They are well-versed in safety and etiquette.

As O’Shei points out, legal permit holders aren’t a danger. They are well-versed in safety and etiquette.

Armed college students can react to the threat of a mass shooter immediately and potentially save themselves and others. Furthermore, prohibiting campus carry does nothing to stop a mass shooter intent on murder, it only condemns others to helpless victimhood.

No one should be condemned to be a victim due to the ignorant and willfully misleading messages of the gun control agenda. If a college student is old enough to participate in all of the typical adult responsibilities and activities of life, they’re certainly old enough to obey the law and simultaneously engage in self-defense options.