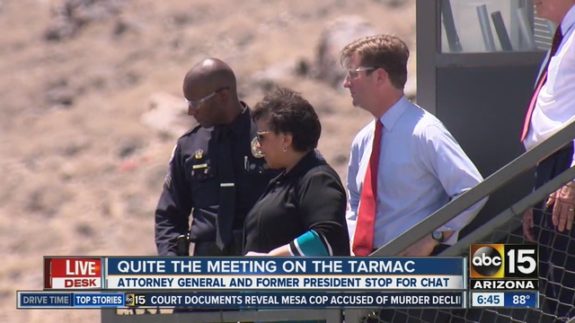 The infamous Phoenix airport tarmac meeting between then Attorney General Loretta Lynch and former President Bill Clinton is currently being investigated by the American Center for Law and Justice.

After pouring over documents connected to meeting, the legal team says they were shocked to learn how dishonest the FBI under James Comey was in relation to the incident.

The ACLJ says they were shocked with the dishonesty of the Comey FBI regarding the controversial tarmac meeting.

“We have just obtained hundreds of pages in our ongoing investigation and federal lawsuit on former Attorney General Loretta Lynch’s tarmac meeting with former President Bill Clinton while the Department of Justice (DOJ) and FBI had an ongoing criminal investigation into Hillary Clinton’s emails,” says a new report from officials with the American Center for Law and Justice.

“The results are shocking.”

…However, from records that now have become available, “It is clear that there were multiple records within the FBI responsive to our request and that discussions regarding the surreptitious meeting between then AG Lynch and the husband of the subject of an ongoing FBI criminal investigation reached the highest levels of the FBI,” the ACLJ reported.

Now there is accusations of collusion between the Department of Justice and the Washington Post.

Stuart Varney: The emails received today include several emails between the FBI and Department of Justice related to that tarmac meeting.

Liz McDonald: The big bombshell in this is the Washington Post reporter saying, “I am hoping I can put it to rest. The New York Times reporter apologetically says he is being pressed into service to cover the story… A DOJ press official says, “I talked with the ABC producer he said he’s not interesting in covering it even if FOX goes with it.”

Stuart Varney: This is collusion between reporters, specifically the Washington Post, and the Department of Justice.

These liberal hacks in DOJ and media were colluding to bury the story.

Via Varney and Co.: