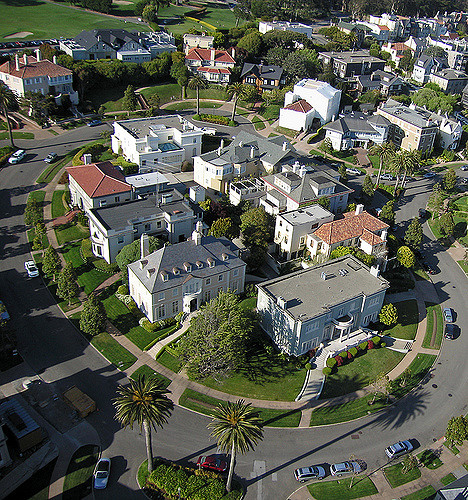 A South Bay couple bought a street in one of the most exclusive neighborhoods in San Francisco lined with $5 million mansions — for a mere $90,000 at a tax lien auction two years ago.

The San Francisco Chronicle reports that the couple may have scored San Francisco’s best real estate bargain of the century:

Tina Lam and Michael Cheng snatched up Presidio Terrace — the block-long, private oval street lined by 35 megamillion-dollar mansions — for $90,000 and change in a city-run auction stemming from an unpaid tax bill. They outlasted several other bidders.

Now they’re looking to cash in — maybe by charging the residents of those mansions to park on their own private street.

Those residents value their privacy — and their exclusivity. Past homeowners have included Sen. Dianne Feinstein and…House Democratic leader Nancy Pelosi…

The couple now owns and controls not only the street itself, but also the sidewalks and all the common areas, which include the lawn between the sidewalk and street, all the little “garden islands,”and palm trees.

“We just got lucky,” Cheng, a real estate investor, told the Chronicle.

The homeowners have made it clear they aren’t going to accept their new “landlord” without a fight.

The UK Daily Mail reports that the city is unlikely to act short of a court order, and insists it is not at fault for the taxpayers’ negligence.

After the homeowners ‘association for Presidio Terrace failed to pay a $14-a-year property tax for three decades, the “city’s tax office finally put the property up for sale at the cost of $994 in an online auction to regain unpaid back taxes, penalties and interest,” Fox News reports.

Now the association is suing the couple and the city, seeking an injunction on any future sale before the matter can be adjudicated — and they want the Board of Supervisors to reverse the sale.

A number of news reports have noted that the tony neighborhood, which Sen. Dianne Feinstein (D-CA) and House Minority Leader Pelosi (D-CA) once called home, had a “whites only” clause prior to the 1948 Supreme Court decision banning racial covenants.