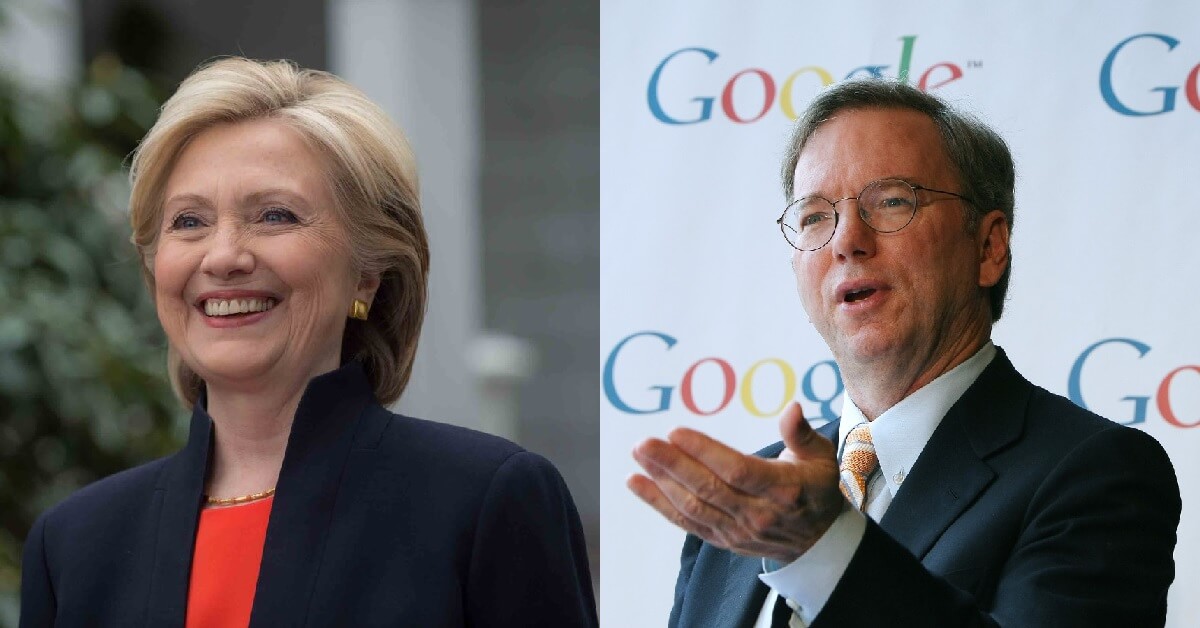 Schmidt is an investor and sits on the board of directors of Civis Analytics, a consulting firm that was founded by Dan Wagner, the chief analytics officer for President Obama’s 2012 presidential campaign. Civis was “born” out of the Obama campaign after Schmidt, who helped as a recruiter and trainer for the campaign, approached Wagner about starting a company at the conclusion of the election.

The Alphabet chairman, who provided seed funding to Civis and later helped the group raise $22 million, was also found to be working with Hillary Clinton’s presidential campaign.

The firm also received $68,400 from Priorities USA Action this year, the largest super PAC that backed Hillary Clinton’s presidential campaign. George Soros was the largest donor to Priorities, having donated $9.5 million to the group throughout the entirety of the 2016 election cycle. Priorities paid Civis more than $1 million during the cycle.

Schmidt and Google came under scrutiny during the 2016 presidential election after some Republicans claimed Google’s search engine was manipulating results in favor of Hillary Clinton and against Donald Trump. Schmidt responded to the accusations by saying that the company remains neutral.

Schmidt, on a personal level, was later found to be directly helping Clinton’s presidential campaign.

Following the release of John Podesta’s hacked emails, the Washington Free Beacon discovered that Podesta had linked up Schmidt with Cheryl Mills, a longtime Clinton aide, and Robby Mook, Clinton’s campaign manager, in April 2014. The email was sent six months before Clinton had launched her campaign.

During a later release, the Free Beacon found a PDF file attached to an email that verified Schmidt was working directly with the Clinton campaign. The document was tacked onto an email that Mook sent to Mills, Podesta, and David Plouffe, Barack Obama’s former campaign manager.

Teddy Goff, a digital strategist for Clinton’s campaign who was previously the digital director for President Obama’s reelection campaign, wrote the memo.

“I have been kept apprised of the work being done by Eric Schmidt’s group and others working directly and indirectly with your team. On the whole, I am comfortable with where we stand and confident in our roadmap to launch day and beyond,” Goff wrote.

“We have instructed Eric’s team to build the most important products in their portfolio—specifically, the back-end of the website, the ability to accept donations (along with associated features, most importantly the ability to store credit card information), and the ability to acquire email addresses—first,” Goff says. “Given how much time remains between now and launch—and, again, the availability of alternative solutions—I believe there is effectively no chance that these core functionalities will not be in place in time for launch.”

While the Schmidt-backed group is never mentioned by name in the memo, Schmidt provided seed funding to a company called The Groundwork.

Michael Slaby, the former chief integration and innovation officer for the Obama campaign, launched The Groundwork from a company he founded called Timshel.

Google, whose lobbyists enjoyed direct access to President Obama’s White House, and visited more than 400 times for meetings during his tenure, was forced to pivot in an attempt to court Trump and Republicans following the election.

Schmidt later appeared at a Trump Tower meeting featuring tech giants despite his work on behalf of Clinton’s campaign. Google donated $285,000 to Trump’s inauguration and the company posted job openings seeking a Washington, D.C., veteran to help with conservative outreach on its policy team.