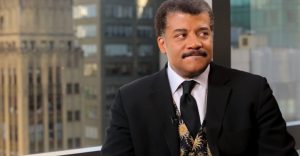 On Monday, the country took a break from the vicissitudes of politics to watch the sun go dark. Unfortunately, the solar eclipse came to an end and human life continued, but not before a few virtue-signaling Leftist scientists bragged about the pre-eminence of their chosen field of endeavor.

Neil deGrasse Tyson made this oblique reference to climate change:

The divided United States of America will unite today, sharing a cosmic event predicted by the methods and tools of science. pic.twitter.com/Q3lNrDLABA

And here’s the all-knowing creator of House of Cards:

Hey climate-change deniers, the scientific community that predicted the #SolarEclipse2017 is the same one that says climate change is real. pic.twitter.com/JrSsmq6fqS

This is not how science works.

Science is about verifiable hypothesis tested against observed results. The problem with the climate change science thus far has been that its computer models have not replicated actual data gathered over time.

That does not mean that future models cannot do better, or that climate change isn’t happening. It does mean that asking the general public to accept the iron-clad nature of climate change in the same way we accept the rotation of planets would be foolhardy. The same argument that deGrasse Tyson and Willimon make could have been used at any point to freeze scientific inquiry — before Copernicus, before Darwin, before Einstein. After all, critics could have stated that the same science that allowed us to predict eclipses thousands of years ago stated that these newfangled theories were nonsense.

Shouting “science” at the moon doesn’t make critics shut up, nor should it. That’s the entire joke Mark Twain told in A Connecticut Yankee in King Arthur’s Court, when the hero of the story uses a solar eclipse as evidence of his own providence. If you want to prove your science, prove it. But labeling something “science” so that you can use the known world to justify the unknown is merely intellectual arrogance masquerading as rational inquiry.