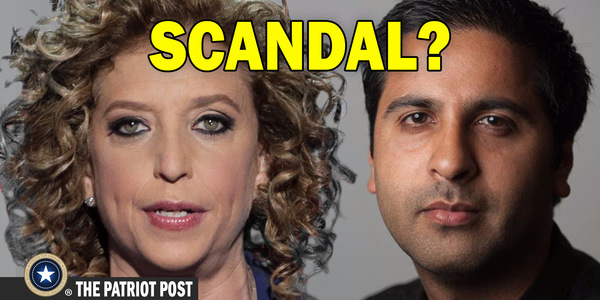 What is Awan hiding and why are Democrats protecting him?

In Congress (Al Franken, John Conyers), entertainment (Harvey Weinstein, Ben Affleck) and the establishment media (Matt Lauer, Charlie Rose), women are stepping up with charges of sexual harassment, and in some cases powerful men are stepping down. As this unfolds, one key abuser has managed to avoid both the outcry and the scrutiny he deserves.

Imran Awan, the IT man employed by Debbie Wasserman Schultz and other prominent Democrats, remains at the center of financial and security scandals. As Luke Rosiak of the Daily Caller reported, “multiple women” in relationships with Imran have “called Virginia law enforcement and alleged being abused by him.”

Police found one of the women “bloodied” and another said she felt like a “slave.” A third woman, Awan’s stepmother Samina Silani, is on record that Awan invoked his authority as a congressional employee to intimidate immigrant women, warning them of his power to have people kidnapped.

Frederica Wilson’s office told the Daily Caller she “does not condone violence against anyone, particularly women. Imran was immediately fired when the allegations were disclosed but our office will not comment on an ongoing investigation.” According to Kyrsten Sinema, “our office contracted with this individual in February 2013 after he was recommended to us by several colleagues and former members. We terminated his contract with our office in February of 2015 for incompetence.”

All the other Democrat women declined to comment on police reports about Imran Awan, but abuse of women is hardly his only problem. When Awan attempted to flee the country in July he was arrested for bank fraud. The Muslim IT man also made thousands of unauthorized logins on congressional servers.

As Frank Miniter noted in Forbes, Imran Awan was born in Pakistan and got a green card through the immigration lottery system, similar to Sayfullo Saipov, the Uzbeki terrorist who killed eight people in New York in October. Awan became a U.S. citizen in 2004 and earned an IT degree from Johns Hopkins. He did not work for any of the six officially vetted IT firms that do work for congressional offices. Even so, Debbie Wasserman Schultz not only brought Awan aboard but hired his wife Hina Alvi and other family members, though none had degrees in information technology.

Imran Awan and his associates should have been cleared through a background check but Miniter found “no public proof that the Awans and the others were even vetted by Capitol Police.” Awan had access to information from members the House Intelligence and Foreign Affairs committees, but as Andrew McCarthy noted, Awan could not possibly have qualified for a security clearance.  Luke Rosiak found evidence that Imran Awan was spending three months or more in Pakistan every year, and told Rep. Louis Gohmert that Awan “was doing his job remotely from Pakistan.”

Awan accessed a server controlled by Rep. Xavier Becerra, once on Hillary Clinton’s short list as a running mate and now attorney general of California. When the Capitol police sought to obtain the data, Awan served up a fake image of the server. Awan was then banned from the congressional computer system but Debbie Wasserman Schultz duly kept the IT man on her payroll for more than six months.

Miniter wonders if Awan has something on DWS and notes that court filings reveal his threats to women. Awan was also “working in Rep. Wasserman Schultz’s office while she was head of the DNC—and when she lost the post after emails leaked or were hacked from the DNC.”

Wasserman Schultz has charged that Awan was “put under scrutiny because of his religious faith,” and that “the right-wing media circus fringe” was jumping to conclusions. Awan’s attorney Chris Gown, a former aide to Bill and Hillary Clinton, said Awan’s arrest for bank fraud was “clearly a right-wing media-driven prosecution by a United States Attorney’s Office that wants to prosecute people for working while Muslim.”

As the Buffalo Springfield said, there’s something happening here. What does Imran Awan have on Debbie Wasserman Schultz, and why won’t Democrats speak out against the abuser? What did Awan do with all the sensitive data? What does Xavier Becerra know, and when did he know it? If FBI bosses know the answers they aren’t talking, but some realities are clear.

The United States had no need for Imran Awan or taxi driver Sayfullo Saipov. Likewise, there was no need for any member of Congress to hire Imran Awan, who did not work for properly vetted IT firms, did not pass a background check, and accessed sensitive data without a security clearance.

Democrats had even less reason to hire Awan’s unqualified wife and family members, who show the negative effects of chain migration. The immigration lottery system may be a winner for terrorists and an abusive Muslim grifter and his family. On the other hand, it’s an outright loser for the United States.