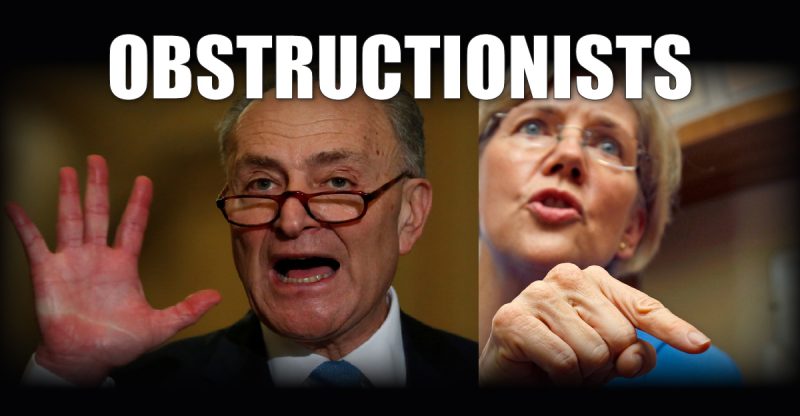 Democrats are threatening to shutter many government agencies on October 1 unless President Donald Trump gives up his popular campaign promise to build the border wall against Mexico, according to Politico.

In response, Trump’s deputies are offering political compromises to Democrats, including a rise in domestic spending, says Politico:

The White House is pushing a deal on Capitol Hill to head off a government shutdown that would lift strict spending caps long opposed by Democrats in exchange for money for President Donald Trump’s border wall with Mexico, multiple sources said.

Marc Short, the White House’s director of legislative affairs, met with top staffers from both parties on the Senate Appropriations Committee last week to make a hard sell for the proposal, the sources said.

Short — who said the border funding would be used for a “double fence” — stressed that the White House is insisting on a down payment for construction this fall. Short also lobbied for a big budget increase for the Pentagon, another priority for Trump.

If Democrats block the spending plan, many government agencies will have to send their employees home. But national security agencies, and various aid programs, such as the Social Security program, would keep operating.

Trump’s pending request for an October funding package of $1.6 billion would help build roughly 62 miles of border wall. In May, Democrats — aided by a passive GOP leadership — blocked a 2017 funding package that would have helped quickly build 42 miles of wall.

But Democratic politicians are also being squeezed between their radical base and popular opinion, which favors Trump’s immigration reform plans. For example, Politico reported that Sen. Tammy Baldwin is opposing the border fence. “I do know for a fact that every [Democrat] considers wall funding to be a poison pill,” she told Politico.

But a recent poll shows that Trump’s immigration reform gets overwhelming support in Wisconsin where Baldwin must faced the voters in 2018. The June poll of 1,000 likely midterm voters was conducted for NumbersUSA, which favors Trump’s merit immigration reform. For example, the poll asked:

Eight additional Democratic Senators are up for election in 2018 in states where Trump won.

In 2014, Schumer and Democrats lost 10 Senate seats after trying to push through the so-called “Gang of Eight” cheap-labor and amnesty bill.