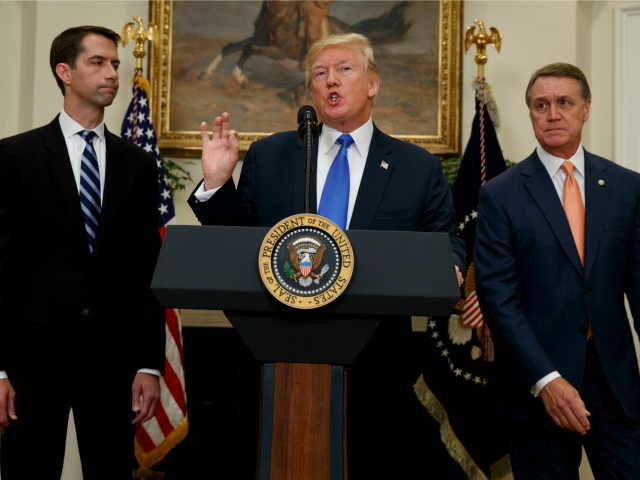 The RAISE Act “will reduce poverty, increase wages and save taxpayers billions and billions of dollars,” Trump told reporters in the Roosevelt Room of the White House. “This legislation demonstrates our compassion for struggling American families who deserve an immigration system that puts their needs first, and that puts America first.”

has placed substantial pressure on American workers, taxpayers and community resources, and among those hit the hardest … are minority workers competing for jobs against brand new arrivals. It has not been fair to our people, to our citizens, to our workers … [this RAISE act] will give Americans a pay raise by reducing immigration… [and] it will restore the sacred bonds of trust between America and its citizens.

Democrats and their ethnic pressure groups are expected to oppose the immigration reform because they wish to increase the inflow of unskilled foreign migrants. Business groups also oppose the measure because it would raise wages and reduce the inflow of new welfare-aided consumers.

However, many polls show strong public support for cutting the annual inflow of immigrants and temporary blue-collar and white-collar foreign workers. That foreign inflow now adds up to almost 4 million people per year. The inflow has a huge economic impact on the 150 million Americans in the workforce, but especially on the 4 million young Americans who join the workforce each year.

The bill was drafted and is being pushed by Georgia Sen. David Perdue and Arkansas Sen. Tom Cotton. It is formally titled the “Reforming American Immigration for a Strong Economy Act.”

The nation’s immigration system “should help American workers to achieve a pay raise and have a higher standard of living,” he said. The new RAISE act “would raise economic growth and help America get more competitive,” said Cotton. “Our current system simply doesn’t do that … it puts great downward pressure on people who work with their hands and on their feet … it is a symbol that we are not committed to working-class Americans.”

Each year, only one-in-15 of the 1 million green card immigrants is accepted because of their ability to grow the economy, said Cotton.

“It is imperative that our immigration system focuses on high skilled workers who can add value to our economy and ultimately achieve their own version of the American dream,” said Perdue.

To help the bill survive opposition from media and business groups, the bill focuses only on green card legal immigration. It does not raise or lower the number of green card workers, such as H-1Bs, or constrict the annual award of work permits, dubbed “Employment Authorization Documents.”

But if the RAISE act becomes law, Democrats and their business allies would lose the huge annual inflow of immigrants whom they expect will soon bring them national political dominance. That loss will pressure Democrats to compete for votes from working-class Americans by offering to slash the very unpopular inflow of visa-workers.

The proposed immigration reform was applauded by pro-American reformers. Roy Beck, the president of NumbersUSA said:

The RAISE Act introduced today by Senators Cotton and Perdue will do more than any other action to fulfill President Trump’s promises as a candidate to create an immigration system that puts the interests of American workers first.

Seeing the President standing with the bill’s sponsors at the White House gives hope to the tens of millions of struggling Americans in stagnant jobs or outside the labor market altogether. NumbersUSA stands with these Americans in wholeheartedly endorsing the RAISE Act.

According to a statement from Perdue, the RAISE Act would:

• Establish a Skills-Based Points System. The RAISE Act would replace the current permanent employment-visa system with a skills-based points system, akin to the systems used by Canada and Australia. The system would prioritize those immigrants who are best positioned to succeed in the United States and expand the economy. Applicants earn points based on education, English-language ability, high-paying job offers, age, record of extraordinary achievement, and entrepreneurial initiative.

• Prioritize Immediate Family Households. The RAISE Act would retain immigration preferences for the spouses and minor children of U.S. citizens and legal permanent residents while eliminating preferences for certain categories of extended and adult family members.

• Eliminate the Outdated Diversity Visa Lottery. The Diversity Lottery is plagued with fraud, advances no economic or humanitarian interest, and does not even promote diversity. The RAISE Act would eliminate the 50,000 visas arbitrarily allocated to this lottery.

• Place a Responsible Limit on Permanent Residency for Refugees. The RAISE Act would limit refugees offered permanent residency to 50,000 per year, in line with a 13-year average.