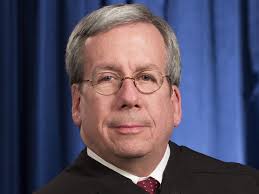 Bill O’Neill is a sitting justice on the Ohio Supreme Court and a candidate for governor. He is also a democrat, which might explain his puzzling social media post in which he brags about having sex with 50 beautiful women. What prompted this? Why did he think this was relevant? Does a guy with that face honestly expect us to believe his claim? These are all questions we may never know the answers to.

Presumably this Facebook post has been deleted, but enough people captured it so we can enjoy it in all its glory. O’Neill threw this thing up this morning: 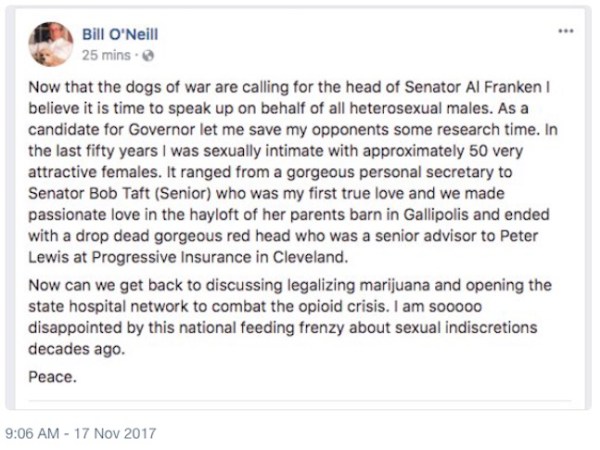 Now that the dogs of war are calling for the head of Senator Al Franken I believe it is time to speak up on behalf of heterosexual males. As a candidate for Governor let me save my opponents some research time. In the last fifty years I was sexually intimate with approximately 50 very attractive females. It ranged from a gorgeous personal secretary to Senator Bob Taft (Senior) who was my first true love and we made passionate love in the hayloft of her parents barn in Gallipolis and ended with a drop dead gorgeous red head who was senior advisor to Perter Lewis at Progressive insurance in Cleveland.

Now we can get back to discussing legalizing marijuana and opening state hospital network to combat the opioid crisis. I am sooooo disappointed by this national feeding frenzy about sexual indiscretions decades ago.

At first glance I’d say that perhaps marijuana and opioids are the reason why O’Neill posted this in the first place. He must have been high on something, because it really does sound like he’s trying to defend sexual assault accusations against fellow democrats like Al Franken. He does understand that there is a difference between consensual sex among two adults and a creep like Franken grabbing a woman’s breasts as she sleeps, right?

Also, go a head and reread his post. Doesn’t he say that Senator Bob Taft was his first love and they made passionate love? What’s up with that? I am assuming that the Senator is not included in his list of 50 very attractive women he banged. Then again, assuming anything when it comes to a liberal is a mistake.

Lastly, this dork never had sex with 50 ugly women, let alone 50 beautiful ones. The only way his claim is even remotely true is if he paid for it or forced himself on them. In either case, those would be crimes and definitely nothing to brag about.

There is already some fallout over this bizarre post. The Hill reports that O’Neill’s campaign spokesman Chris Clevenger has resigned calling the post “disturbing and misguided.”

“Sexual harassment and assault is no laughing matter. The next Governor of Ohio must take it seriously to receive my vote,” wrote Clevenger.

Did Clevenger forget that O’Neil is a democrat and this is how they all treat sexual harassment? I mean, when it’s a liberal doing it. If a conservative is accused of something, suddenly they get super serious about it.