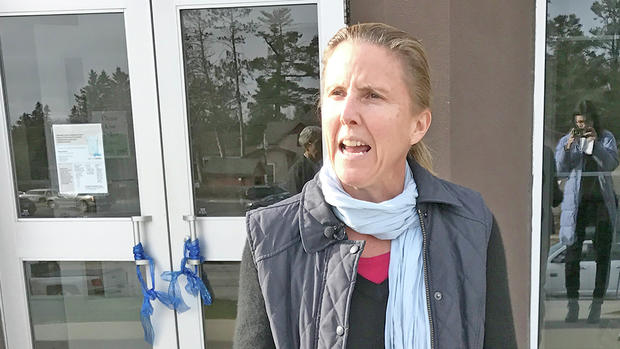 An eco-terrorist responsible for sabotaging an oil pipeline in North Dakota suggested Saturday that shutting down the multi-billion dollar line was necessary to defuse the ticking time bomb of man-made global warming.

Temporarily taking offline a pair of pipelines in Minnesota earlier this year was part of an effort to save the world from fossil fuels, Seattle activist and poet Emily Johnston wrote in an editorial for The Guardian. A judge is allowing her to use a “necessity defense” to justify her actions last year against the Enbridge pipeline.

“As recent months have made clear, climate change is not only an imminent threat; it is an existing catastrophe. It’s going to get worse, and tar sands oil—the dirtiest oil on Earth—is one of the reasons,” Johnston wrote, referring to a spate of hurricanes that clobbered the U.S. earlier this summer.

Most necessity defenses are allowed in instances like when someone is arrested for breaking and entering after hearing a baby crying in a burning building and rushing in to save the infant. The action was justifiable to prevent the immediate harm of another person.

Some of Johnston’s fellow conspirators are having second thoughts about their sabotage efforts – one activist argued after being convicted that maybe his fellow saboteurs overinflated the imminent danger.

Michael Foster, who was convicted in October of criminal mischief after damaging the Keystone Pipeline, told reporters shortly after his conviction that he might “honor the judge and the jury and their verdict” rather than appealing the conviction.

“It’s been a year, and pollution is worse today than the day I turned the Keystone valve shut,” said Foster, who faces up to 21 years in prison for his action. “Based on that alone, I wonder how effective it was. If people don’t respond quickly (to climate change), it won’t matter.”

Johnston remains undeterred. She claims her ability to put the fossil fuel on trial could set a legal precedent for future activists who wish to damage oil infrastructure, while also using climatologists to defend eco-terrorist who act “in accordance with higher laws.”

“We knew we were at risk for years in prison,” Johnston noted in her op-ed. “But the nation needs to wake up now to what’s coming our way if we don’t reduce emissions boldly and fast; business as usual is now genocidal.”

“I have little doubt that the awful weather events of the last couple of months played some role in this—it’s not just scientists seeing the truth anymore: the building is indeed burning, and all the world’s babies are in it,” she added.

Pipeline developers, for their part, have been moderately successful in recent cases against activists who try direct efforts to stymie projects.

A federal judge determined earlier this year, for instance, that the company behind the Dakota Access Pipeline in North Dakota could hide information pertaining to the pipeline’s leak points at areas along its route.

The judge argued the exception was necessary to prevent possible acts of vandalism in the future.