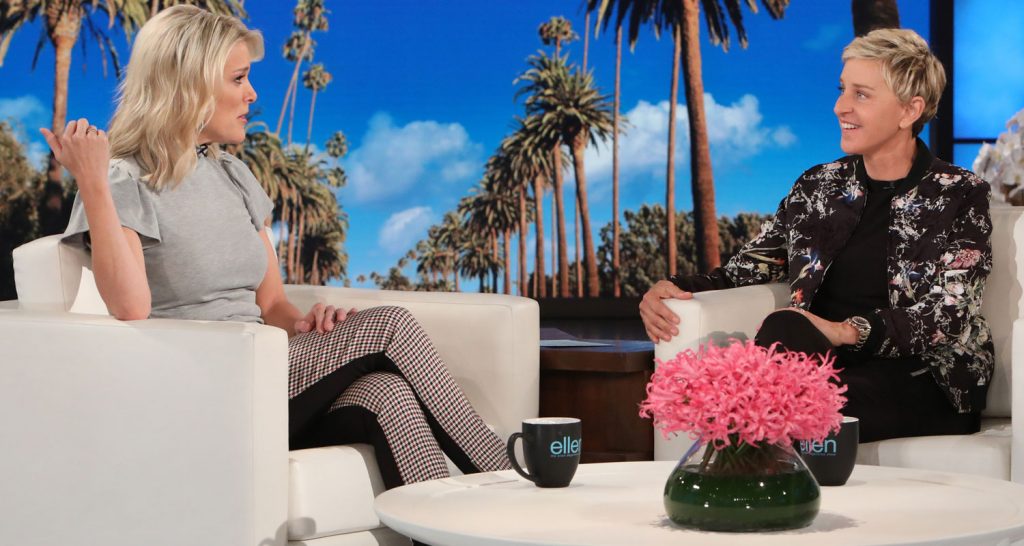 “I can’t have someone who I feel is not only dangerous for the country and for me personally as a gay woman but to the world.”

On her talk show Wednesday, Ellen DeGeneres told Megyn Kelly that she would not invite President Donald Trump on her show because he is “not only dangerous for the country and for me personally as a gay woman but to the world.”

Ellen made the comment after she asked Kelly if she would be willing to invite Trump on her new show, Megyn Kelly Today. Despite the bad blood between Trump and Kelly, the former Fox News host said yes — which seemed to slightly surprise Ellen.

“Would you have him on your show?” asked Ellen.

“Definitely,” said Kelly. “I mean, I would not say no to the sitting President of the United States.”

“Really?” replied Ellen. When Kelly turned the question back on Ellen, she emphatically said she would not have Trump on her show.

“Absolutely. Would you?” said Kelly.

“Yeah,” said Ellen. The response, to the surprise of no one, earned massive applause from Ellen’s audience. Pressed to explain, Ellen said she did not want to “validate” the president because she believes he is “dangerous” to the country, gay people like herself, and the world (transcript via RCP):

I just, you know, he is who he is and he has enough attention and he has his Twitter account and he has ways to get his message across. There’s nothing that I am going to say to him that is going to change him and I don’t want to give him a platform because it just validates him. And for me to have someone on the show, I really, I have to at least admire them in some way and I can’t have someone who I feel is not only dangerous for the country and for me personally as a gay woman but to the world. He’s dividing all of us and I think I don’t want him on the show,” DeGeneres said again to massive applause.

Ellen did not explain what she meant by Trump being “dangerous” to gay people. Despite similar, repeated accusations from the Left, Trump was elected as the most pro-LGBT Republican ever and has made clear that he is “fine” with the Supreme Court’s ruling on same-sex marriage. The truth is, Trump likely supported gay marriage before Hillary Clinton, who did not endorse it until 2013.

If Ellen feels threatened by Trump’s DOJ defending the First Amendment right of a private business owner to choose not to “create expression for and participate” in a ceremony, like a gay wedding, with which his deeply held beliefs conflict, her issue is with the Constitution, not Trump. If she is conflating gay people with transgender individuals, Trump’s “transgender military ban” is actually just a return to a decades-old policy only reversed by President Obama in his final term and based in pragmatic issues, not ideological ones. Here is a summary of Trump’s positions on LGBT issues dating back a few decades from The Hill:

In the 1980s & 1990s Trump donated heavily to charities that focused on the AIDS outbreak. When he floated a third party presidential run in 1999 he went on record saying he would consider adding sexual orientation to the Civil Rights Act. Trump is also believed to be the first private club owner in Palm Beach — in this case Mar-a-Lago — to admit a gay couple. This is not the resume of an LGBT foe.

Fast forward to the 2016 election and Trump’s view of the LGBT community remained unchanged. In June 2015 he forcefully condemned the terror attack at Pulse nightclub, a LGBT club. In condemning this attack, Trump bravely spoke an ugly truth many in the elite dare not speak – radical Islam and the LGBT community do not mix. Trump took this truth to Cleveland when he vowed to protect the LGBT community. …

Trump asked gay Silicon Valley tycoon Peter Thiel to address the Republican delegates. Thiel accepted then and is now a part of Trump’s transition team. And now Trump is said to be considering Richard Grenell, an openly gay man, to be his ambassador to the U.N.